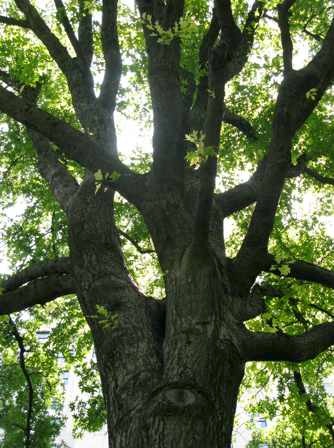 There is a plaque beneath this tree which reads:

1836 – 1936. This tree from the Virginia Estate of former President James Madison presented to the city of New York by the Fifth Avenue Association, Inc. to commemorate the first centennial of the opening of Madison Avenue.

It’s in Madison Park (23rd and a bunch of other streets). I realized I couldn’t come up with a single fact about Madison beyond the fact that he was president, and yet New York City loved him enough to name an avenue after him. Why? He must have done something really great for us. Googling. Okay, apparently it all got started because some guy named William “Corporal” Thompson had a farmhouse and this site and he named it Madison Cottage. He was the Madison fan. From there we got Madison Avenue and then Madison Square Garden. Madison, Madison, Madison.

Madison was the “father of the Constitution.” I should have known that. Embarrassed. He was also one of the authors of the Bill of Rights although initially he was against writing them, and one of his reasons was “it was dangerous, since enumeration of some rights might be taken to imply the absence of other rights.”

It just started raining. Big storm coming apparently. Not a good time to be in Madison Park.

Bali When He Was a Baby

Clean Up on West 11th Street

Long Dark Morning of the Soul

2 thoughts on “Madison who?”