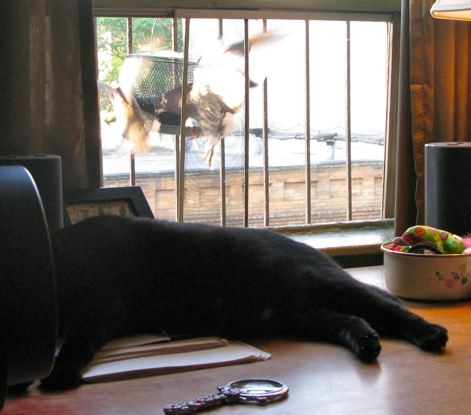 And you guys said it would happen, but the cats have gotten almost blase about the birds.

Not completely uninterested, in fact I wish I could have gotten a picture of Finney and a dove literally nose to nose staring at each other from either side of the screen the other day. The dove was doing the “baroo” head tilt, and Finney was relatively calmly watching. By relatively I mean no tail action.

But here is Finney sleeping, for God’s sake, while there is frantic bird action going on right behind him.

Meanwhile, I can’t believe how hard it is to sell books. I’m doing everything I can think of, but my book is not breaking any selling records, alas. Some books catch on, and some … don’t. I’ve got a few things coming up that might make a difference, one I can’t wait to talk about, but man. I’m exhausted.

Oh, I’m not sure if I mentioned it, but I sent my proposal for my next book to my agent and she wants me to try again. It’s salvageable she thinks, thank God, it could be worse, but I still have to gear up to go back in there and try again.

I promise to take picture of other things besides birds when I go out today.

Halloween in the West Village 2015

Bringing Music Back to Afghanistan