Oh God. I’m shaking. I just got off the phone with this place called The Gourmet Depot. I called to ask when the replacement coffee carafe I had ordered would arrive because I thought it would be here by now and the person I spoke to was horrible. He said they didn’t actually have the carafe, it was back ordered and when I asked why they didn’t tell me that when I ordered it he said they emailed me the next day. I checked my mail and just in case, I checked my junk mail and there was no email. (In fact no way, I emailed them yesterday to find out when it was going to ship and I hadn’t heard back and that was why I called.)

He asked me if I wanted to cancel the order and at that point that wasn’t the issue and he said something rude, and I said something back, my voice going up an octave. This happens when I get upset. He said he wasn’t going to talk to me if I was going to scream, which I hadn’t done! And I said so. He said it was a “little bit of a scream,” which might have been funny if he hadn’t already been rude and if he had tacked on an “but I’m sorry if I was brusque.” I asked if he had a boss and he said he was the boss. When I said I wasn’t happy with his service he said he didn’t care! He actually said that. “I don’t care.”

So don’t shop here, because they officially don’t care! There’s probably a lot of places with this name, this is an appliance outfit in San Francisco. Except, now I’m thinking if the boss is answering phone calls about shipping the night before Thanksgiving maybe business is really bad and the poor guy is just at the end of his rope. So total jerk or some poor guy about to go under? But when he said he didn’t care he sounded really pleased and amused by himself and then said the most insincere “you have a happy holiday” type thing, and hung up on me. No. I’m going for jerk.

In the meantime, here is a not very well focused picture of the people who were lined outside the Marc Jacob store a few hours ago in the rain. 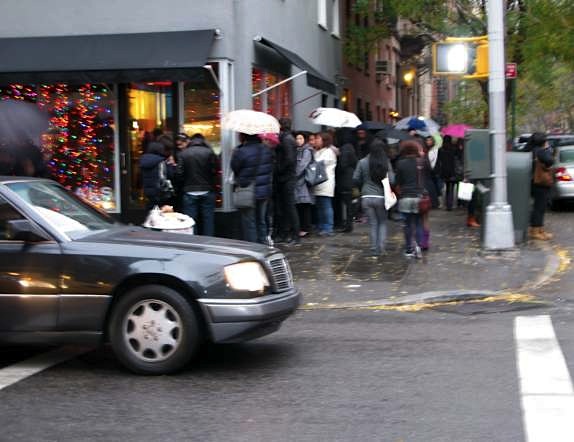 I heard from my editor!!

When I Ran Echo Out of my Apartment

One thought on “Don’t Shop at The Gourmet Depot”