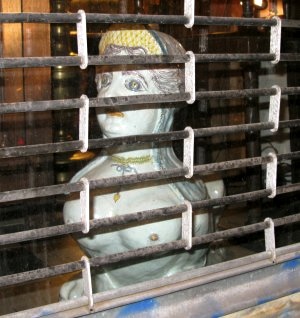 I dropped Buddy off at the vet at 8am for his biopsy, which means abdominal surgery, a big deal in itself just to find out what’s wrong with him. My poor little guy. They’ll call me this afternoon. If he’s not too drugged out I can take him home at the end of the day.

I had a terrible revelation last night at choir. We’re working on the Brahms Requiem. The last time I sang this was exactly ten years ago, and just before we started working on it my cat Veets died of cancer. Ten years later and the very cat I got when Veets died may now have cancer and here I am singing the Requiem again. I even wrote “Veets Theme” in several places in the score because the music made me think of him.

On my way to rehearsal, I took a bunch of pictures of the kinds of things in the windows of the antique stores along the way. The weird things that people make and buy.

When Charity Got a Bad Name