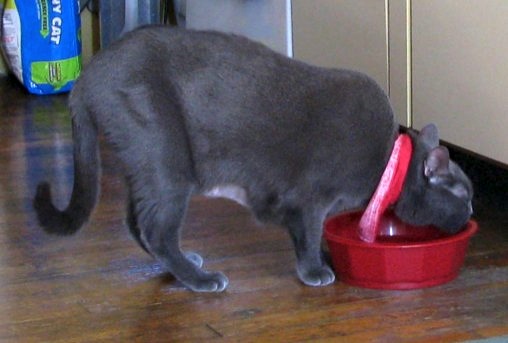 The vets put that scarf on him. I didn’t do that!

It’s the best possible news on every level.  He’s got the low-grade lymphoma and according to the vet, cats can live a good quality of life for many years with this. She said I should think of it as a chronic, but manageable disease.

She put him on the chlorambucil (aka leukeran) which is, as Melissa said, a very mild chemotherapy drug, AND it’s not expensive, AND I only need to bring him next month, then for another ultrasound in 2-3 months, so I won’t be going completely broke in order to pay for visits and medicine.

Aside from “this has all been a big mistake, he’s fine” this is the best news she could have given me. I am SO happy.  I am just so freaking happy.

I Want To Travel Around in Time

They Were Young Once