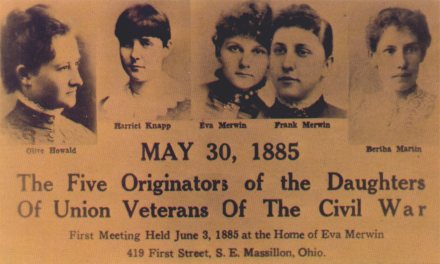 A while back I joined an organization called the Daughters of the Union Veterans of the Civil War in order to get some information about my grandmother and great grandmother who were members.

Since then I regularly get these newletters which announce whenever a “real daughter” dies. A real daughter is someone whose father fought in the Civil War.

It blows my mind that there are people alive whose fathers fought in the Civil War. 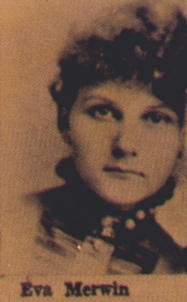 I quickly realized that the reason this is possible is because they count children born after the war and men can keep having children for a long time. For instance, the two that were announced in the most recent newsletter were born in 1909 and 1919.

Still, the fact that there are people alive who talked to Civil War vets about the war blows my mind. That is if the vets were willing to talk about it. But these women could have heard stories about those battles directly from the horse’s mouth. (What an expression.) I should talk to some of them. Pretty soon all these relatively direct sources will be gone. I wonder what stories they might have? I’m going to contact the organization and see.

That Eva Merwin was quite the looker, wasn’t she? According to the Daughters of the Union Veterans of the Civil War website, Eva and the other founders pictured above were just teenagers when they decided to form this organization (1885). I wish their website had more pictures. If I had skills in that area I would help. They also need a moderator to answer questions and participate in the discussions. An interesting organization though. There’s something odd about keeping it up. Odd is probably not the right word. But it was a civil war, a family fight. It’s the kind of thing where you almost want to say, okay, we fought, it was bad, but lets put it behind us.

The Best Cat Animation EVER

Soon I Will Have a Mouth of Ugly Teeth