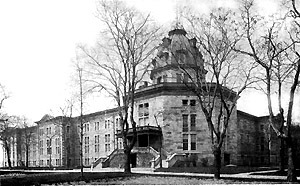 The truth is I don’t really have an update. I learned that Ream’s father died 16 years after she did, on Welfare Island. That’s a picture of the Metropolitan Hospital where he died (the former New York City Lunatic Asylum). Ream’s mother Jennie had already died just before Christmas, on December 17, 1916, when Ream was 14. (Her mother had tuberculosis.)

The descendants I found were never told about Ream so they couldn’t tell me anything. I’m hoping to someday find a picture of her, but the side of the family who has the old family pictures just had a death in the family.

But I asked them if someday they could look and see if there are pictures of their grandfather Ralph Hoxie as a boy. That was Ream’s younger brother. Perhaps in one of those pictures is an unidentified girl, who might turn out to be Ream.

I have a few other leads to follow though for more information. Ream had a cousin she was close to named Jessie Ward. One day at the library, Ream and Jessie met a boy named Redvers Bowen, and Ream carried on a flirtation with him until her death. He was ruled out as a suspect, although I don’t know why, so who knows. But he has since died. If I can track down descendants of Jessie or Redvers however, I might be able to turn up more information.

I also know that Ream went to school at PS 46 in the Bronx and I have a request into them for old records.

So that’s where I am!

Back story for this post here, here and here.