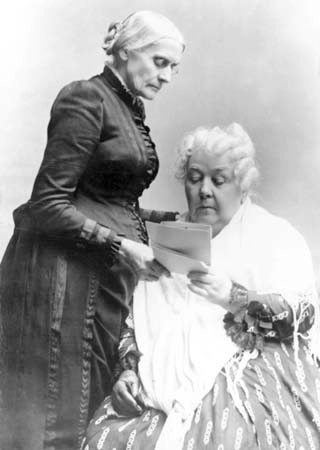 I’ll be back later today with a more New Years-y post, hopefully, but I just wanted to rave about this documentary I watched about Susan B. Anthony and Elizabeth Cady Stanton and their fight to get women the right to vote. It’s called Not For Ourselves Alone. I missed I don’t know how much of the first half, I came across it channel surfing, but I recorded and watched all of the second half. Mesmerizing and mind-blowingly well done. I know, women’s rights, blah-blah-blah, but trust me, it was absolutely riveting.

And we didn’t get the vote in their lifetime. It didn’t happen until freaking 1920. Can you believe that?? It took that long to figure out that we deserve that same right? I’m doing all this research about singing and music and composers and I realize that all this time that I’m writing about, women couldn’t vote. And they could barely talk in public, much less sing (most of the early choral societies were all male).

We always think of America as so forward thinking, but over and over, if you do the research, we’re just not. We weren’t close to the first to give women the right to vote. I forget how many countries were listed in the show, but dozens, including the Soviet Union, gave women the right to vote before we did. Look how many other countries that have already had women leaders.

Anyway, watch it. It’s great. Trust me. And thank you Susan B. Anthony and Elizabeth Cady Stanton (and thank you Ken Burns and Paul Barnes and everyone else who worked on this). The filmmakers really capture how much work and heart and intelligence went into this battle. I can’t imagine summoning all that it must have took. Anthony and Cady Stanton should be huge national heroes, celebrated often, with many books and movies. They should be as big as George Washington and anyone else who fought for freedom and independence.

6 thoughts on “Not For Ourselves Alone”