Someone posted this on Echo. Why isn’t this being reported non-stop?? A group anti-immigrant vigilantes murder a nine-year-old begging for her life? Jesus Christ. This should be all over the news all the time.

WASHINGTON — Shawna Forde, whom a jury convicted last week of murdering nine-year-old Brisenia Flores and her father, Raul Flores, was sentenced to death by an Arizona jury on Tuesday. The unanimous jury ruling is binding. The court found that Forde led a group of anti-immigrant vigilantes in a March 2009 raid on the Flores home, where they posed as immigration agents and pushed their way through the door.

She and her accomplices, Albert Robert Gaxiola and Jason Eugene Bush, allegedly shot Raul Flores before turning their guns on Brisenia, who begged not to be shot. Gina Gonzalez, Brisenia’s mother, played dead and survived the attack.

The case was not designated as a hate crime, despite Forde’s long history with anti-immigrant organizations. She once maintained a Tea Party blog, was a member of Minuteman Civil Defense Corps and has presented herself as a representative of Federation for American Immigration Reform. (All three have since distanced themselves from her.) After being cast out from the Minuteman group due to erratic behavior, she formed her own vigilante group, called Minutemen American Defense, which also patrolled the United States-Mexico border trying to detect illegal immigration.

A sad, lonely violin in the window of a pawnshop. Other items inside: a couple sets of dominos and a DVD player. 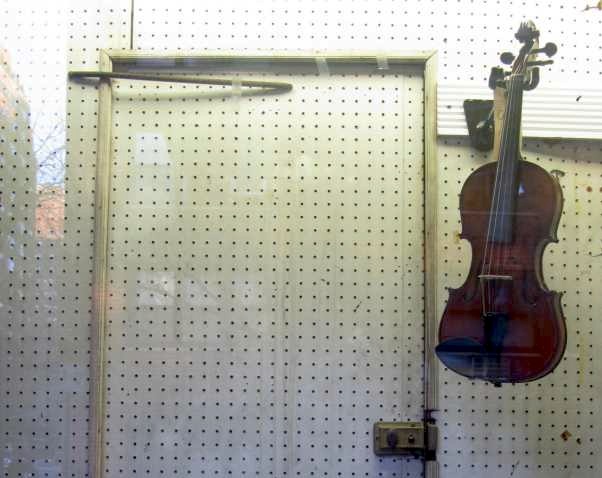 This Will Be My Last Lap Swim Contest Post

Walking Around in the Snow

2 thoughts on “Mother of God, Why am I hearing about this for the first time?”