I couldn’t sleep one night and I watched an episode of a BBC series called Doctor Who. It’s been true love ever since. The show been on for decades and different actors have taken over playing the Doctor. They’ve even made changing the actors part of the mythology. The doctor periodically regenerates, and that’s how they explain the totally new appearance. The current Doctor is my favorite. My love for him is in the stratosphere.

It runs on BBC America and the new season starts tomorrow. Here is all you need to know to jump right in, and I promise if you give it a try you will thank me.

The Doctor is the last of a race called Time Lords and they can travel through time and space. His time machine is called a Tardis and it’s shaped like a British police box, which looks like an old-fashioned telephone booth (I’ve never been to England). The Doctor always travels with someone else, called a companion, and the current companion is Amy Pond. My love for her is in the stratosphere too. There’s all sorts of bad guys throughout the universe and my favorites are the sleeping angels and the daleks. There’s also another character called River Song. I don’t quite know what her relationship is to the doctor, and I think we’re not supposed to yet. She can travel in time too, apparently, and she and the Doctor keep crossing paths in time and there are hints that they might be married in the future.

There’s a lot more, but that’s really all you need to start watching and to know stratospheric love.

I took this passing through Union Square. That spire in the distance is Grace Church. 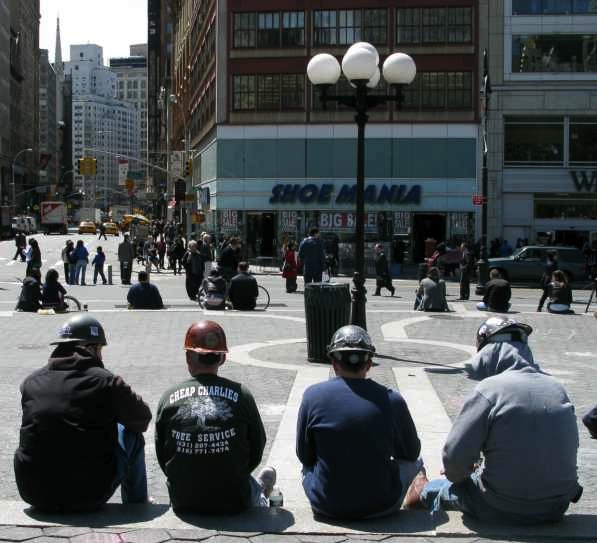 Do you think Laurie Anderson spray painted that?

2 thoughts on “Doctor Who Returns Tomorrow!!”