I don’t know a lot about this case, just that three young men originally convicted of murdering three boys were allowed to take Alford pleas and were subsequently freed. Obviously there was enough wrong with the case for this to have taken place. Apparently even some of the family members of the boys believe the West Memphis Three are innocent.

There’s really no way to know for sure at this point if they are guilty or innocent. So I was shocked when I read the snippet of a letter to the editor published in People Magazine in response to an article they’d done about the case.

Someone named Melissa Lamer wrote, “I could care less about these men. My heart goes out to the families of those innocent little boys.”

First, of course it’s terrible for the families, but if these young men are innocent, it’s terrible for them too. If Melissa Lamer went to jail for 18 years for a crime she didn’t commit, and not just any crime but the crime of murdering children, would she feel the world didn’t owe her any compassion either? Obviously, she must believe the men are guilty, but since she can’t know that, I have to wonder why there is no room in her heart to imagine how horrible it might be for these three young men if they are, in fact, innocent. Maybe reserve your hate until we know for sure? There’s plenty of incontrovertibly bad things happening every day to get mad about.

I was walking through Washington Square Park last week and there was a small crowd of people very intently taking a picture of … something. I walked over. It was a squirrel. It must have been some squirrel, but I didn’t stay long enough to see. 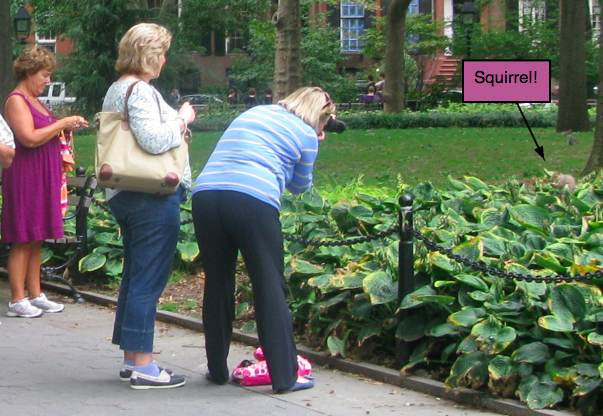 I Need to go Shopping