Last night my band played out in front of the American Bible Society as part of an event uptown called Winter’s Eve. All up and down the streets around Lincoln Center bands and dancers performed, it was great. There was a wonderful happy, alive, festive feeling in the air. I have a video of an absolutely adorable little girl playing my drum during a break. I’d post it, but I know not all parents want pictures of their children on the internet. Someone who works at the American Bible Society got a great shot of us and the crowd from the roof and he said he’d send it, so maybe I’ll be posting that later.

Playing outside is my favorite thing and last night it was inexplicably in the sixties, while at the same time it was snowing down south. Uh-oh. End times.

I’m getting my hair colored FOR FREE this morning at Bumble & Bumble. By students. I’ve done this before though, for a free haircut, and the students are overseen every second by instructors, so I’m not too nervous. Okay, I’m a little nervous.

Here’s a shot of us from last night that I took from the back. I really want to post the aerial view though. 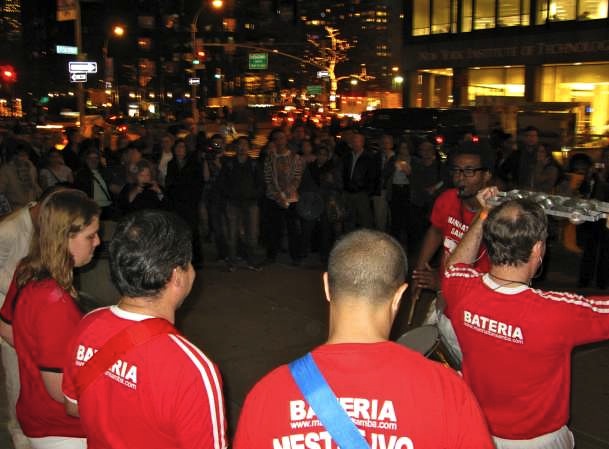 Hope for Paws and Rescue From the Hart

Other Great News This Week