Oh God. I started this post, but then I stopped to read this horrifying article about honor killing. I’m still traumatized by this excellent but upsetting story that Anne Garrels did for NPR in 2005. A 16 year old girl had been abducted and raped and then returned to her family. Her cousin, one of the men who killed her said, “She knew the customs, but I don’t think she expected we would kill her. She was crying. I saw in her eyes that she thought we would take her in our arms and say, `Thank God you are safe.’ But she got bullets instead.”

I’ve never recovered from that. Those words haunt me. They murder an innocent child instead of the people who kidnapped and raped her? Who is this man? I know by his words that he’s haunted too, he knows on some level he did the wrong thing. How can things like this continue?

Music is one of the things we have for solace when it all goes to hell. I’ve been putting examples I’ve found of this in my book. I saw this great tweet that someone sent to Gareth Malone, the choir conductor who does that BBC series, The Choir. The guy has a family member fighting in Afghanistan (speaking of honor killing) and he said: “Don’t cry. Sing.”

Our last performance of the season is today. I’m a little sad.

My niece, Ellie Horn, initiated a benefit to put up a sign commemorating the fact that Rachmaninoff had lived and worked on Long Island. Thank you for the beautiful shot, Kevin Krooss! 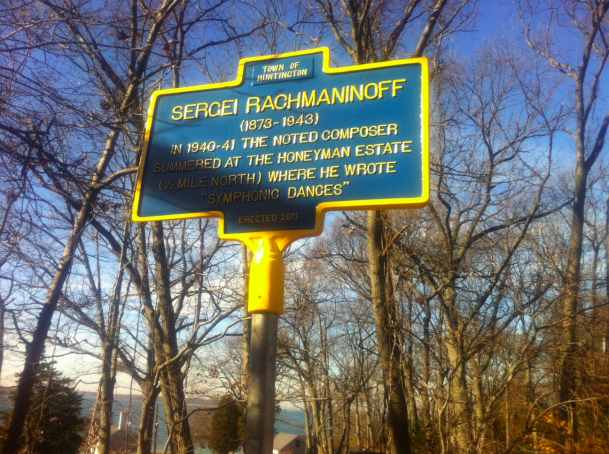 I’ve made my decision — Travis.

5 thoughts on “Our Last Holiday Performance is Today”