A month since Buddy died. I’ve got two more months of mourning before I’m officially a crazy person, according to the pet bereavement counselor. Thanks to Bleeck though, I’m officially out of the woods. That makes me feel bad. Like, I took a drug instead of giving Buddy his full-mourning-due. He earned it.

Every day though, I cry about something Buddy related. Yesterday it was about magazines. I always had to put my magazines out of Buddy-reach because one of his ways of getting me up quicker in the mornings was to shred my magazines. At night I had to remember to put them on a shelf or in the morning I’d hear rip-tear-rip, a never-fail method of getting me to jump up on command/shred. Buddy was so smart. I had to child-proof the refrigerator and the cabinets because he could open them all.

Isn’t it funny how these really annoying things become the most tender memories? I don’t have to put magazines out of reach anymore. I don’t have to lock up the refrigerator. I’m crying again just typing about it.

A poet in Union Square. Note the typewriter. 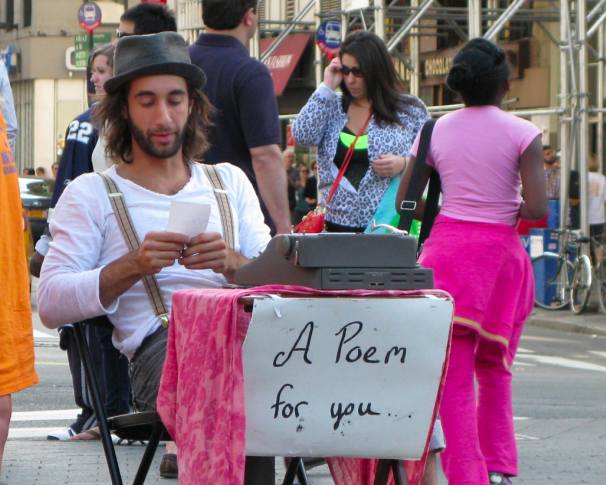 Your Life Is a Book: How To Craft & Publish Your Memoir

6 thoughts on “Tomorrow is a Month”