Before you read my post go here. This is proof that we can do this. We can put our differences aside and fix this problem.

The last time I posted about gun control was on July 20th, and I went to the Brady Campaign to Prevent Gun Violence website and learned that 54,455 had been shot so far in America. It’s up to 94,313 now, with 83 so far today and it’s only 7:30 in the morning.

To recap: this year we’ve had shootings at a movie theatre in Colorado, a Sikh temple in Wisconsin, and now at a children’s school in Connecticut. Actually, I just looked and according to The Nation we’ve had 16 mass shootings this year.

Come on everyone, put your politics aside. Let’s work together on this. 87% of Americans actually want more gun control. I know it’s a complicated issue, and we also have to address how this country manages mental health, but for the love of God.

I was going to post a lovely Christmas-y picture, but it doesn’t seem appropriate. Here is a sad Christmas picture of some wreaths on the fence overlooking the park next to the City recreation center where I used to swim before Hurricane Sandy. It’s been closed ever since and they are still cleaning up and repairing.

Note: In the time it took me to write this post six more people have been shot in America.

Update: I’ve been reading some great tweets but I had to post this one from the editor of The Nation. I’ve been mad at Bloomberg for being so critical of Obama about gun control, but this is the perfect response to his criticism. “Obama should announce now he will appoint Mayor Bloomberg as head of Commission to craft & push Congress to enact common sense gun control.” By the way, three more people have been shot in America. It’s still only 8:15 in the morning.

Update: I found out the figures from the Brady Campaign to Prevent Gun Violence website are estimates based on the statistics from previous years. That’s very misleading and annoying. 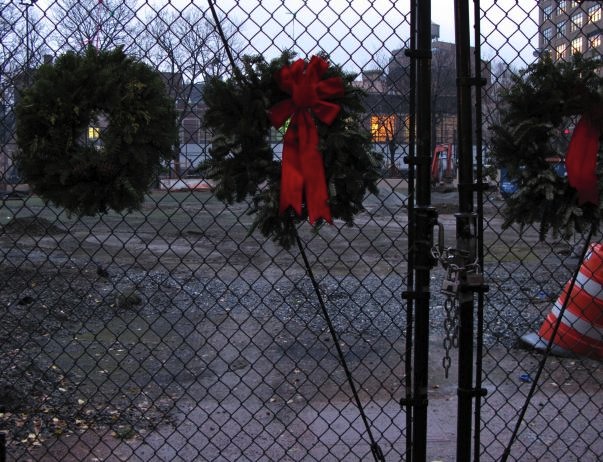 Note to Self: Buy Rain Boots

I Should Have Gone Out Last Night

14 thoughts on “Gun Control – This Time I Mean It”