I meant to post about this yesterday, because there was an article in the Times about how Mister Magoo’s Christmas Carol was going to air last night for the first time in decades. (Except I’m pretty sure I’ve seen it on TV within the last five years or so.) I love Mister Magoo’s Christmas Carol and I watch it every year. I do have a couple of disagreements with the author of the article, though.

One, he thought the song Winter is Warm was the emotional core of the movie, and I don’t know. That was always a slow section for me as a child, although as an adult I appreciate the bittersweet beauty of it. And two, he went on about the humor of We’re Despicable section, which was never funny for me, then or now, and it goes on way too long. I love that I can fast forward through it these days.

For me the emotional core of the movie is the conflict and truth between the tragic All Alone in the World (my favorite song in the movie) and the redemptive The Lord’s Bright Blessing. I’d include The Winter is Warm and make it a tragic/redemptive triangle, but Belle is dropped in this adaptation. Dickens gives her a husband in the book, thank you, Dickens. In fact, why is Belle either dropped or ends up a spinster in movie (or animated) versions?

I learned that the animator Darrell Van Citters has actually written a book called Mister Magoo’s Christmas Carol: The Making of the First Animated Christmas Special. I will have to take a look!

Another nice thing about living in New York City: someone is always promoting something and you could just be walking along the street and someone hands you free stuff. The people in this picture gave me a candy cane and a truly lovely blank notebook. The day before, when I was walking home from the gym, I got a bottle of a something called NeuroBliss (which I haven’t tried yet). 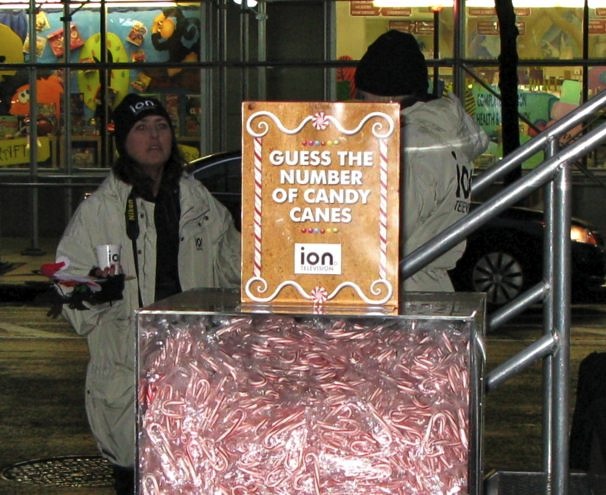