I’ve always wanted Guantánamo closed and the prisoners there brought here to New York City. Then try the ones where there is enough evidence to bring them to trial and free the others. I’m sorry, but if you don’t have enough to put them on trial we must let them go. For the rest, I have always wanted the supreme satisfaction of putting them on trial.

I just read the Times article about Abu Ghaith though, (I’m not an expert on terrorists) and I’m reading that he did not play a role in the 9/11 attacks. They’re saying he was basically a propagandist who called on their supporters to attack us. But I remember being taught that in America you are allowed to say things like that, and it’s only an issue if the threat is imminent. IE, you can say, “We must overthrow the government,” but not, “Pick up your guns NOW and overthrow the government.” Although I was taught that decades ago and so many laws have changed since then. I don’t know if any lawyers read my blog but I’d love a clarification about that.

So settle in, Sulaiman. I hope you have a nice view of One World Trade Center. And I really hope your guards are female. I would particular enjoy how much you would hate to be bossed around by women packing heat.

Outside my window right now, looking west towards the Hudson River. I love snow, but this is a very dreary snowfall. 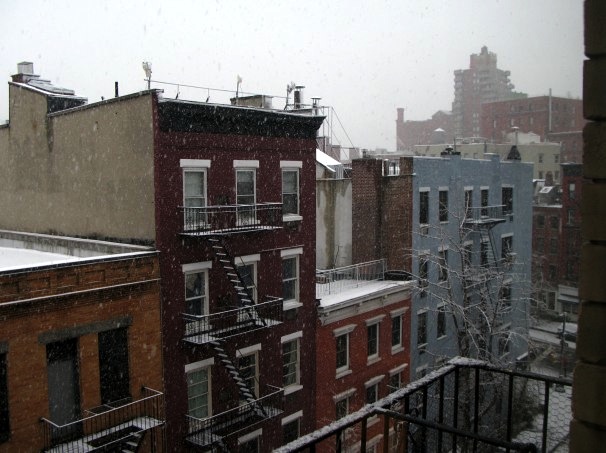 One of These Days