I wrote about the British conductor Gareth Malone and his reality series The Choir briefly in my book, and I’ve been talking about him and this show in almost every radio interview I’ve done ever since. The reason I keep talking about the show is this: in the most dramatic and moving way possible, it shows how wrong people are when they think they can’t sing.

It always begins the same, Malone finds the most unlikely people to be members of a choir, and then talks them into auditioning. Most of the people in the auditions can barely sing, some can’t seem to sing at all, and a few people sound great. In just a few weeks however, everything changes. Everyone gets better. In particular, the people who couldn’t sing at all sound just fine, and together everyone sounds amazing. It’s impossible to watch without sobbing. To see the looks on their faces when they hear the undeniable beauty of their aggregate sound, and to hear it yourself, after having watched them face down their fears and insecurity in order to do this in the first place, only to be rewarded in such a marvelous way, not with just sound but with this group they are now a part of, this community—again, you’ll be bawling like a baby when you see it.

Here’s a great quote which sums up what they are feeling and the gift this series has give them:

“The power of such experience is so great and its satisfactions so deep that those who have shared it are likely to be changed fundamentally in their relation to music. For such people music inevitably becomes a source of some of life’s deepest rewards. This is no small matter, given the universal need for such satisfaction and its rarity in human life.” —A Philosophy of Music Education, by Benett Reimer.

Malone is bringing his reality series to America! Here it will be called It Takes a Choir and it’s premiering on the USA Network in November. Woohoo!

I took this yesterday. I was drawn to all the shades of blue and red. The little dog was just a lucky break, and so is the guy in the red shorts, echoing the reds in the rest of the photograph, and the other guy in the blue shirt! 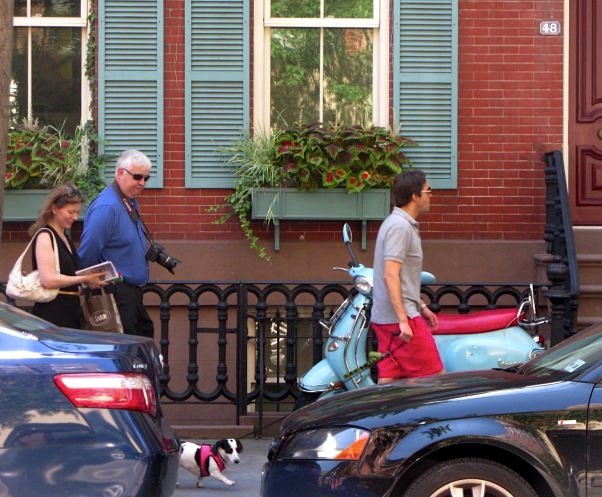 The Tyranny of the Sleeping Cat

One thought on “It Takes a Choir”