The Divide is the book I wanted to write, and I don’t know why I didn’t, but it’s just as well because it looks like Matt Taibbi did an amazing job, and his background was so much better suited for this project. Thank you for writing it, Matt Taibbi.

I first became aware of the prosecution disparity when I was researching unsolved murders, and I wrote an op-ed titled Counting Corporate Crooks. What was infuriating me was no one was going after white collar criminals with the kind of vigor they went after other criminals, and no one was auditing the people investigating white collar crime. Who knows if they’re doing a good job or not?? The kind of sentences someone who robs a candy store gets vs someone who robs millions was a whole other enraging wave. It’s insane and so fucking immoral and wrong. From the Washington Post review:

“How can it be, he asks, that a street drifter such as Tory Marone serves 40 days in jail after cops find half a reefer in his pocket, but not a single executive of HSBC faces criminal charges after the bank “admitted to laundering billions of dollars for drug cartels in Mexico and Colombia, washing money for terrorist-connected organizations in the Middle East, allowing rogue states under formal sanctions by the U.S. government to move money freely by the tens of billions through its American subsidiary, [and] letting Russian mobsters wash money on a grand scale”?”

Again, thank you for writing this book Matt Taibbi. Here he is on The Daily Show, talking about the book. And thank you Jon Stewart for having him on and bringing attention to this book.

When I was in Cambridge this weekend I took a walk in the Old Burial Ground in Harvard Square. I saw a large stone for the Dana family and took a picture because I used to walk by Dana Street every day on my way home when I lived in Cambridge. Dana Street, I just learned, was named after Massachusetts Supreme Judicial Court Chief Justice Francis Dana, whose name isn’t on this stone. It could be on the other side because he is buried there. 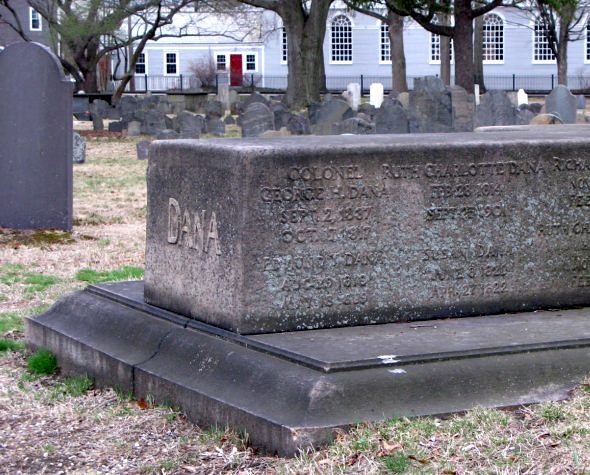 Happy Birthday to me!

On Trend – When did being trendy become a good thing?

4 thoughts on “The Divide: American Injustice in the Age of the Wealth Gap”