I’ve been going out of my mind! Every night a mosquito or two will feed on me throughout the night. As the bite starts to itch I wake up, so I end up waking up over and over and over. I haven’t gotten a decent night’s sleep in months. I used to get the occasional mosquito but now it’s completely out of hand. In the beginning, whenever two bites were even remotely near each other I’d panic and think bedbugs! But even when I didn’t catch a mosquito in the act there was always one nearby on the wall.

Although I have screens in all my open windows I’ve got very old windows with huge gaps everywhere. There are plenty of places for mosquitos to come in. I didn’t want to cover my windows in plastic because even in the dead of winter I like to open the windows.

Thank you Garber Hardware and Aemon, my fantastic next door neighbor who works there for suggesting I try using Frost King air conditioner weather seal, 2 1/4″ x 2 1/4 ” x 42″. You can cut it to any size, and, unlike some of the others things I tried that didn’t work, you can take them in and out easily when necessary. It was so easy to fit it into big and small gaps. I went around to every window and carefully filled in every opening. (That reads like a commercial! I’m just trying to pass on a tip.)

I also planned to buy some sort of bug spray to catch any stray mosquito that might already be on the inside, but when I read the directions and cautions on each can they read like certain death for me and the cats. So I went to bed with a bottle of Windex within reach. I figured that can’t be good for them, that it might kill them slowly.

Last night only one mosquito showed up, I got him with the Windex, and he never showed up again. I slept well. The end. Thank God.

Setting up lights on Broadway for a movie shoot. 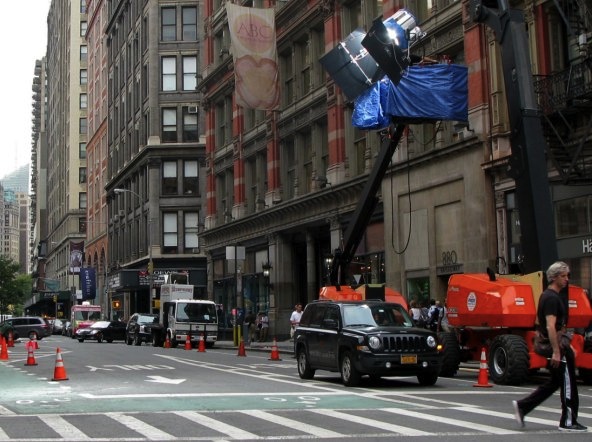 But I’m Not a Filmmaker!