This weekend is going to be a busy weekend. The Loser’s Lounge tonight, the Millions March tomorrow, where hopefully I won’t be among the arrested. I was just thinking that one of the good things about protesting in a dense, urban area is they don’t throw tear gas canisters at us. Too many bystanders.

Santacon is happening the same day, which is the absolute worst timing. Santacon has become a hated thing because the Santas get too drunk and disorderly, throwing up all over the place, acting like jerks. But I only see them early in the day, while they’re still relatively sober. For me it’s still fun to see packs of roaming Santas all over the place. It’s unfortunate timing though, to have two large groups out and about at the same time, one so serious and one so not.

I came across this picture and it made me a little sad. This never happens anymore. Bleeck still adores and wants to play with Finney, but he’s too rough about it and Finney has decided he doesn’t want Bleecker anywhere near him. That said, wherever Finney is Bleecker is nearby, trying to get closer. Sometimes Finney lets Bleecker sleep within inches of him. 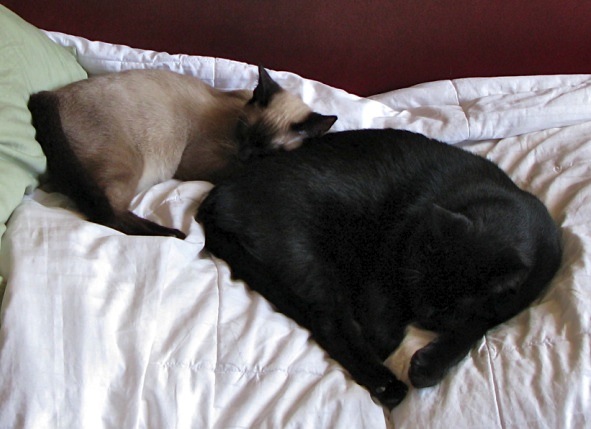 I didn’t have my camera last night!

I’m Missing a lot of Work