I’ve posted about these personalized decks before, when they started appearing on the roofs in my West Village neighborhood. They’re just so strange. When people are in them, they look like they’re in a cage. The ones where the slats are close together are the most inexplicable (not sure if that’s what they’re called) because they would block your view of the city.

These two are on the building on the west side on my building. When people are sitting in their little pen like this, and there are people in the other pen practically right next to them, wouldn’t they feel, well, a little silly? Here we are, in our boxes on the roof. 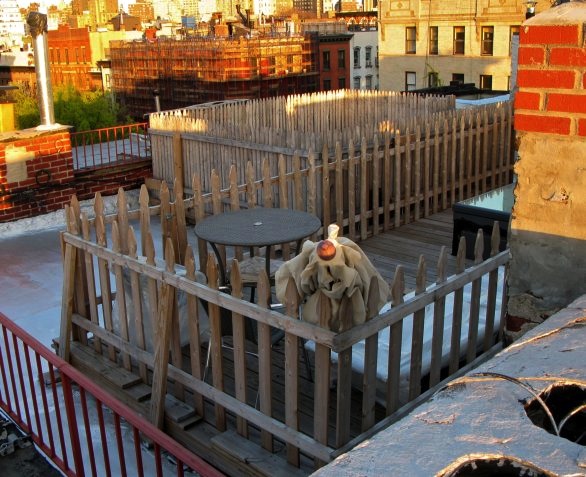 This one is on the south side of the same building. At least it’s the only one there for now. 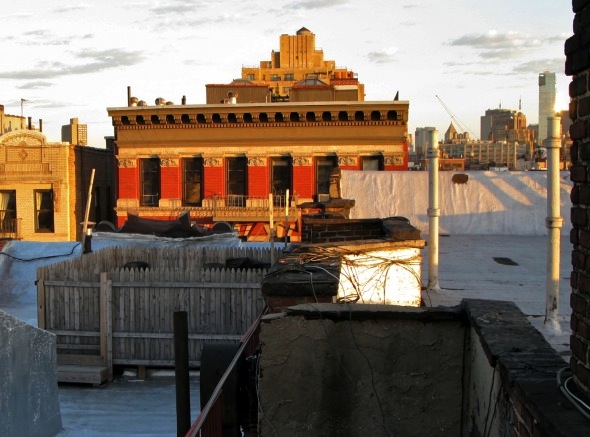 This one looks pleasant to sit in, until you pull back and see … 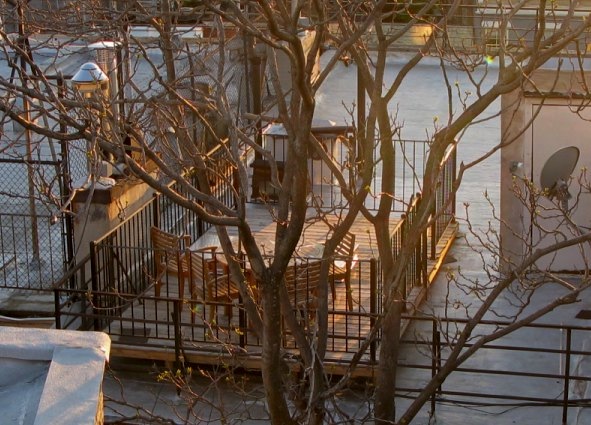 … that it is one of three on the same roof. Still, I like this one best. I would sit there with my tea with drops of vanilla extract (copying writer Vivian Swift) if anyone invited me. 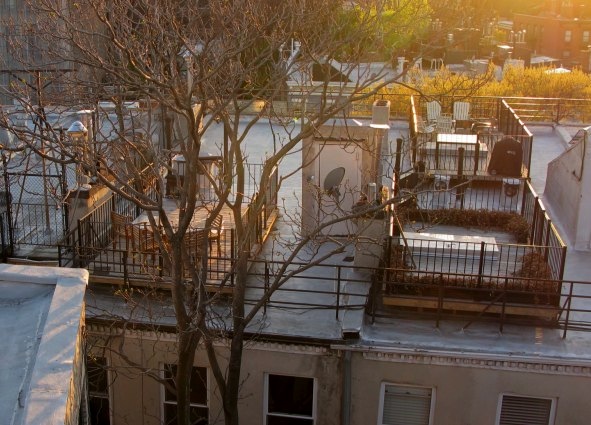 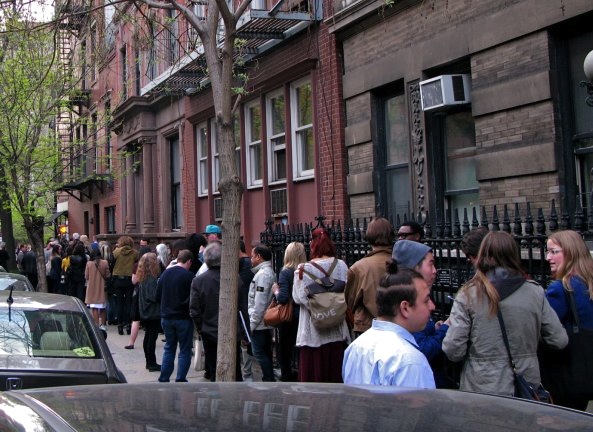 Every time I go to the Municipal Archives I pass by the old clock on the former New York Sun building. It makes me sad, because I miss the time when newspapers ruled, and were fiercely competitive with each other, and how when I’d go to bars it always felt like they were filled with newspaper people getting drunk. And because I want this clock to work. Is there a reason why no one fixes it? Maybe I should go inside one day. Why oh why isn’t time travel real?? 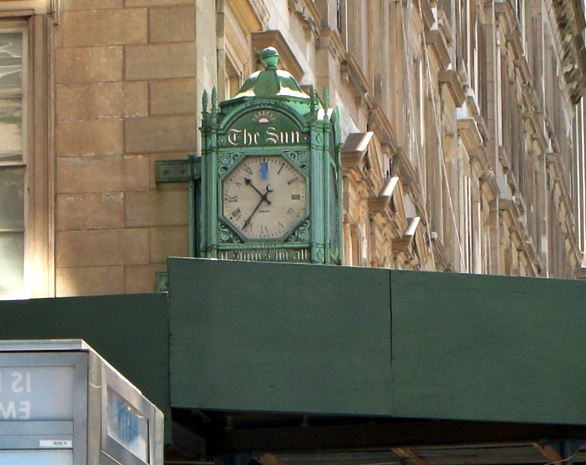 One of the things I did was try to find out the story behind the name plates on my floor. There are three apartments on my floor and beside each door is a very old name plate. They are decades old and do not reflect who lives inside. The names are: Crabtree, (at the far end of the hall) Hudson, (next door to me) and Conway (the name attached to my apartment).

Here is a picture of the name plate next to my apartment. It has since been painted over and I had to scratch the paint away to reveal the name. (More below.) 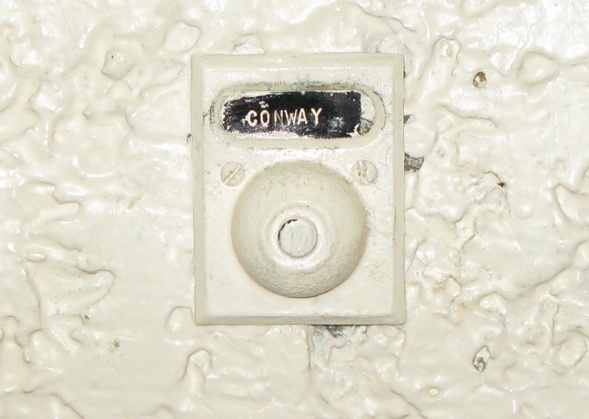 I tracked down a former neighbor who was now living in a nursing home (this was over 15 years ago), and she couldn’t tell me anything about Crabtree or Conway, but she did tell me a story about Hudson. The head of the family was a cop, she said, who’d been killed in the line of duty sometime in the 1950’s or 1960’s. When that happened his young wife took their child and fled and never came back. Someone continued to pay rent on the apartment but no one lived there and when I moved there in the early 1980s it remained empty for years. A while back I posted about going inside with the super and what we found.

Anyway, fast forward to this week when I realized the 1940 Federal Census was available now and maybe Crabtree, Hudson and Conway would be listed (they weren’t in the earlier census years). Crabtree wasn’t there, but Hudson and Conway were. Conway turned out to be Robert E. Conway, who worked at a bank, and his wife Minnie, who was a clerk for a jewelry company.

The Hudsons were Joseph and his wife Julia, and Joseph’s profession is listed as a patrolman for the NYPD! At least part of what I was told was true. Even better, an Ancestry.com user posted pictures of Joe and Julia (see below). It doesn’t say much about him in the Hudson Family Tree, except that he died before 1958, so it looks like the other part of the story might be true as well. And because his shield number is clearly readable in this photograph it should be possible to find out what happened to him. I hope it’s alright that I posted these pictures. If not I will take them down immediately. But thank you for your service, Joseph Hudson, and my sympathies to your family for their loss.

Crabtree is the only mystery left now. The 1950 census will be released on April 1, 2022, only seven years to wait! For the record, the census wasn’t the only place I checked, I looked through a ton of sources and archives, guided in part by a GREAT article written by Christopher Gray. Here’s an adapted and updated version of his original article. AND here’s a link to a ton of tips and resources put together by the New York Public Library. Thank you Christopher Gray and the New York Public Library.

It’s a fun and interesting search, I promise you. In my building I turned up a movie star, a Russian spy, a college professor who was a Holocaust survivor, and a few crimes! (Okay, they were minor crimes.) And now Joe and Julia Hudson. 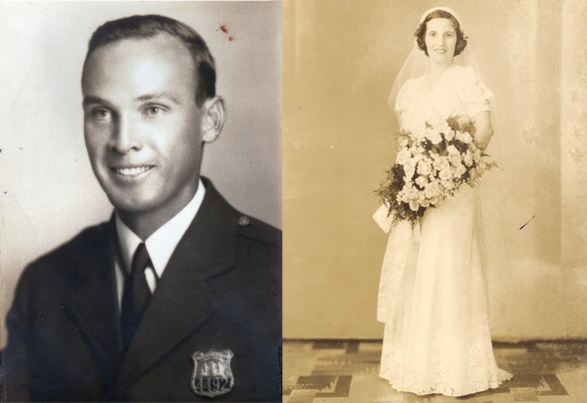