I need two root canals. Not one, two. We were watching two teeth and I was hoping to catch a break, and maybe only need one, but no. I need two. Of course. Because the universe hates me. Not enough to kill me, thank God, but enough to want to torture me.

Meanwhile I can hear steam hissing in the radiators! The heat is back! At least there’s that. The cats and I will be warm tonight.

The picture below is of someone actually sitting in Gramercy Park. For those outside New York City, Gramercy Park is a small, beautiful, well-preserved part of New York. They also have a park that only residents there can use. It’s locked to everyone else. It’s lovely, looks restful, and NO ONE USES IT. I walk by it every time I go to the dentist, which is a lot, because as we know the universe dislikes me intensely, and the park is almost always empty.

It makes sense in the winter, but it’s often empty in the spring, summer and fall. 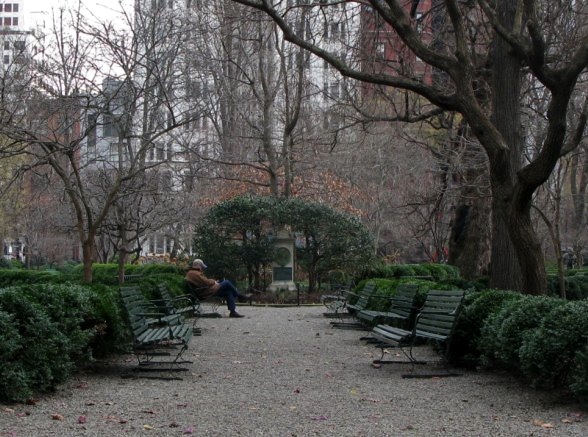