I just posted this on Facebook, and I know I’ve posted about this before, but as I said on Facebook, I just finished the documentary 13th and I have to rant again.

It started with my book about the NYPD’s Cold Case Squad. I became enlightened about how much time, manpower, and money went into investigating and prosecuting some crimes and criminals, and how little went into others, most particularly white collar crimes and criminals. Matt Taibbi wrote the book I didn’t have in me at the time to write, “The Divide: American Injustice in the Age of the Wealth Gap.” After spending a few years immersed in the subject of murder, I just couldn’t do it. I still haven’t read The Divide, but it’s next up on my to-read list. From a review of Taibbi’s book:

“How can it be, he asks, that a street drifter such as Tory Marone serves 40 days in jail after cops find half a reefer in his pocket, but not a single executive of HSBC faces criminal charges after the bank “admitted to laundering billions of dollars for drug cartels in Mexico and Colombia, washing money for terrorist-connected organizations in the Middle East, allowing rogue states under formal sanctions by the U.S. government to move money freely by the tens of billions through its American subsidiary, [and] letting Russian mobsters wash money on a grand scale”?”

I’ve learned the history of how we deal with the poor, the mentally ill poor, and the criminal poor. It’s all horrible and unfair, but the history of correction and incarceration is the worst, and the most unfair of all. Which is not to say we didn’t treat, and continue to treat these other groups badly. It’s just that on top of treating people who were incarcerated badly, is the over-arching idea that they have this coming to them. When you look closely at who “they” are and what “this” is, it breaks your heart. Then, as now, people with money who commit crimes are not hunted and incarcerated and abused to the degree that poor people are.

It breaks my heart how little has changed, and in some cases, has gotten much, much worse. I practically had a heart attack when I watched the Bill Moyers documentary about Rikers.

It’s so hard to get people to care. But watch the Bill Moyers documentary about Rikers. Watch the recent documentary 13th. Then read Matt Taibbi’s book. Your heart will break too. Because it’s a much bigger issue than “jails are awful,” which the documentary 13th reveals so well. Actually, John Oliver has done a number of pieces which illustrate the unfairness and the repercussions of the criminal justice system, which might be more accessible to some. Watch his pieces about the bail bond system, or mandatory minimum sentences, and others.

As part of my research, I read all the annual reports written by the people who were overseeing and running these terrible institutions in the 19th century. They would come right out say that it was a nightmare. But year after year, little changed. It was like everyone was paralyzed, it was all too much and intractable, and even throwing money at the problem, as much as that was definitely needed, was not all that had to be done.

Part of me is almost sympathetic to their lack of action, because I feel paralyzed now. But are we going to let another hundred or so years go by and let it get still worse??

The Penitentiary looks so lovely and not at all foreboding in this drawing. 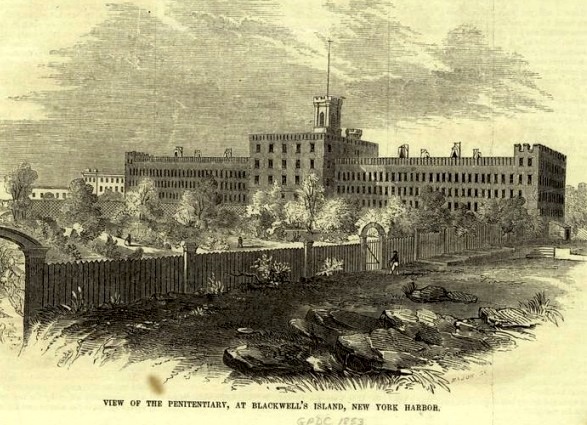 And Death Shall Have No Dominion