I woke in the middle of the night, as per usual, and I ended up watching the Woodstock documentary on American Experience. It was a great documentary, and I couldn’t take my eyes off it. I will pay for this today at work.

I’ll never forgive myself for not going. I was only 13 years old and my mother wouldn’t let me go, but I’d already started ignoring my parent’s restrictions by that point, why did I listen to them then??

The most charming part of the documentary was Max Yasgar, the owner of the farm where the festival took place. I’ve been googling him this morning. His neighbors never forgave him apparently, and people point out that he did it because he thought it would be good for business.

So what if he did? As a person who runs a business I understand how important it becomes to do what you can to keep your business alive. As long as you’re not doing something that hurts people in order to accomplish that, fine.

In the early 1980’s I was a volunteer at the Gay Men’s Health Crisis. This was at the beginning of the AIDS epidemic. At our training session, they went around the room and each person had to give a selfish reason for why they were volunteering. If we didn’t have a selfish reason why we were doing this, the trainer explained, we would burn out too quickly. It was okay to be here for both altruistic and selfish reasons, he insisted. They didn’t cancel each other out.

(As an example, I posted that story for two reasons. One, in defense of Max Yasgur, and two, because I’m proud of my volunteer efforts and I guess I am showing off!)

It’s clear Max Yasgur was moved by the festival and the attendees, and had other non-selfish reasons for letting the organizers use his farm. You can listen to him address the crowd here. The sound quality is not great, but it gets better when Max speaks. He was a conservative republican, but he was also a man of integrity. I’ve been googling him, and I was sad to learn he only lived for a few more years after the festival. His son wrote a book that I want to get a hold of, Max B. Yasgur: The Woodstock Festival’s Famous Farmer. But I can only find two copies in libraries outside New York. I’ll have to see if I can get a copy via interlibrary loan.

The boys, hanging out as I google. 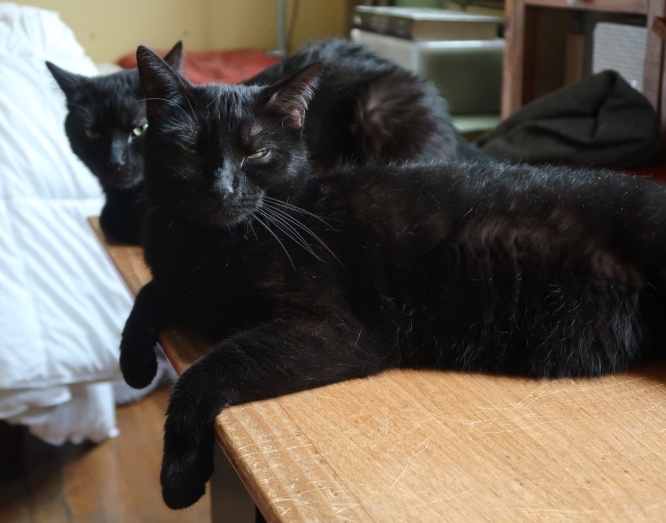