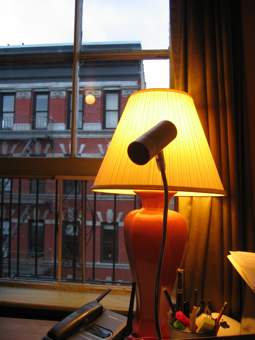 I bought a stand for my isight camera — I need it for a new blog I’m planning called Buried in New York. Doesn’t the isight mounted like that look a little bit like a tiny War of the Worlds?

The new blog is going to be about stuff that I’ve written about in my books, things that are buried and forgotten somewhere. But I also want to interview people, either about forgotten things, or because the people themselves have been forgotten.

For instance, I was watching this grade B, scifi movie from my childhood, Monolith Monsters (very satisfying, it took me back and I actually enjoyed it) and I wondered whatever happened to the little girl who almost turned to stone in the movie.

People might not like the idea of being interviewed for a blog named Buried in New York. I have to think about this.

My Book at The Strand

Got My First Shot!