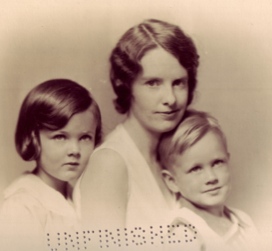 My earlier posting of my grandparent’s house brought a flood of memories from my father! Since they included a bunch of New York figures and some New York history, I asked him if I could post his email here (that’s him on the right).

“The pictures really bring back memories. That was my fire truck in the picture. I still remember that gift clearly, and I was very young that Christmas, probably six or seven. If you look, you will see my folks all dressed up. In those days a lot of the neighbors would go around in a sled (if there was snow) and sing carols, and drink any grog at each house where they stopped. This was all after we were all sleeping.

When they were finished they came home and dressed the tree. You can imagine what time that was. We never saw a sign of a tree until Christmas morning. They were blessed with an excellent community spirit which still continued throughout my growing up. Jamaica Estates was a particular community. A good deal of that spirit came from your grandfather who put in many hours working as president of the association, which he was for the most years of his living there. It’s amazing how the area has retained it’s status to this very day. Some of the homes were much bigger than ours, and I would guess worth several million in this day’s market.

Many hugely successful people lived in the Estates. King Kullen, father of the modern supermarket lived on Radnor Road, the next street. Donald Trump’s father, Fred, would walk up to our house with little Donald in a carriage to gab with my father. The Conway’s lived down a couple of blocks. Jim Conway worked with me when I bought the house in Centerport. His family ran the Long Island City Savings Bank, which has grown to be quite large. Neighbors ran Sulka’s, a great mens store, FAO Schwartz, the toy empire, and on and on. One of the men was the first to buy the Empire State Building when it was resold. There are numerous stories there in Jamaica Estates. It would be fun to see how the history has gone.

You should look into the history of Jamaica Estates – it is very interesting. You might remember that the “great” depression was in 1929. I was born in ’28. My grandfather, Peter, was, among other things, a builder. When my father got married my grandfather built two houses, side by side, on Avon Road. My father designed both. My grandfather told my father that he would get the house which did not sell first. After the house next door sold to the McKenna’s, my father got our house. The Estates was to be a clone of Tuxedo Park in Westchester. The initial homes built were quite large, even by today’s standards. When the depression broke things came to a quick stop. The later homes were smaller than the earlier ones, but followed a tradition of upscale which exists even today.

When I was young, I would go into one or two of the big homes which were abandoned as a result of the depression. One beautiful big Tudor had been left so quickly that all the furniture and clothes were still there until they were finally taken by people going into the house. It was a big adventure to sneak ninto the ‘”haunted” house. There are many stories around the area which I remember fondly.”

The Public Domain by David Lang

More Police Activity Under My Window

2 thoughts on “Memories of Jamaica Estates”