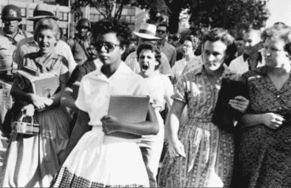 Once again, I really thought this book was going to be a snap compared to my book about unsolved murders. I’m working on a small passage about a letter to the editor of Life Magazine that Rhine wrote in 1957, right after pictures of the Little Rock Nine appeared in the magazine. (The Governor had brought in the National Guard to block de-segregation, and prevent nine black students from entering Central High School in Little Rock, Arkansas.)

Rhine wrote a moving letter, and most people responded positively, but one person in Georgia wrote to say that the word “nigger” wasn’t so bad, and scoffed at what he called Rhine’s “emotional tizzy,” and said, “… there’s a good chance, actors that children are, they maybe [sic] enjoying their roles … As a psychologist, Dr. Rhine should be interested in the white children, particularly girls, with a deep seated (and justly so as Mississippi and other cases prove) fear of integrated rape, forced a bayonetpoint to closely associate with negro boys. Are not their souls scarred?”

Was he referring to Emmett Till, the 14-year-old who was murdered in 1955 because he whistled at a white woman?

I looked the person up, and sure enough, he’s still living in Georgia. I want to call him, to ask him to comment on this letter. Perhaps he might welcome the chance to take these words back, but I might get an equally ugly response, 49 years later. Ugh, ugh, ugh.

But I should call him, right?

Things I’m Doing Instead of Going Out There

Today I Learn to Podcast

5 thoughts on “Another Difficult Phone Call to Make”