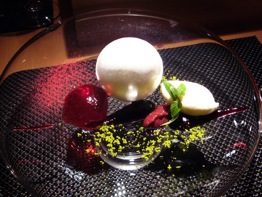 The place I went to lunch was L’Atelier de Jo’l Robuchon. It’s frustrating because I know I can’t describe how exquisite my lunch was. I forgot to bring my camera which is a good thing, because I’m sure my photographing every course would have mortified Jonathan. But every dish was also visually perfect, the different plates they came on, the color, arrangement, the range of textures, with this wonderful bubbly foam on top of a number of them, that was my favorite I think. The work that must have gone into every spoonful of food, the different layers, and how they would taste together — I just can’t imagine it. It’s a particular kind of genius/total obsession to detail that produces perfection which is almost painful, because you want more of everything you taste. (I did finally get full though.) Thank you, Jonathan. The picture doesn’t quite capture that sphere, which is filled with more perfection. It’s a beautiful, shiny gold. (The photograph us from http://augieland.blogs.com/.)

Last night, around 9:30 police cars and emergency vehicles started pouring downtown. At 9:31 one police car went screaming down my street and I heard it hit something and just keep right on going. That was unsettling. After a while heliopter lights filled the sky. It turns out four people were shot and killed further down on Bleecker. A guy went into a pizzeria and shot a bartender, two auxiliary police went after him and the guy shot both of them (they were 28-years-old and only freaking 19!) and then the regular police shot him.

Oh christ. I just read that the guy who shot the bartender, shot him 15 times in the back. He walked into the restaurant, the bartender gave him a menu, turned around, and then the guy shot him 15 times. And then killing those poor kid cops. I wonder the hell his story is going to turn out to be?

I just realized, my friend Jonathan, who works in the Medical Examiner’s office, will be attending to all these bodies today. He told me he gives the tough cases to the new guys. “They have to learn.” But I don’t imagine these sad cases will be too tough.

(I feel terrible posting American Idol thoughts, so I’ll just keep it to Sanjaya is still here–pre-teens and Vote for the Worst are so annoying.)

One thought on “The Most Perfect Lunch”