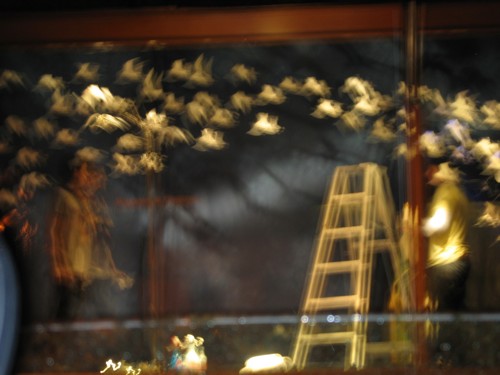 When I was in art school, if something came out well by accident, ie, someone knocked your arm and messed up what you were about to paint, but then you look and go, “Oh. I like that,” it didn’t quite count. You don’t get the same credit as you would have if you had done it on purpose. The other night I was in a cab and saw these guys working on this beautiful window display on Madison. I leaned over Extra T (her nickname) and Ruby (also her nickname) and took a couple of shots. I didn’t mean for them to be blurry, but I think this shot is stunningly beautiful, even though I get NO credit and it doesn’t quite count.

I looked over what I have to do in order to hand my book in by the end of June, and now I am on a strict schedule. I only get so much time per chapter. It’s a little maddening. For instance, I was working on the “drugs” chapter yesterday and came across this weird table-rapping thing in California that the Lab guys got involved in around the same time. It’s just so bizarre for them to be involved in a 19th century table rapping thing in 1961. I have to look into it. So, I will spend the day on what will probably end up being two parapgraphs in the book.

That kind of thing is worth it, to have cool, tiny little parts peppered throughout the book, it’s like the equivalent of Christmas stocking gifts. Not as good as the main gift, but you love them and wouldn’t want them to go away. But, when you feel on deadline, you almost wish you hadn’t come across them. I’m trying to chill out and enjoy them as the nice, happy accident/gift that they are.