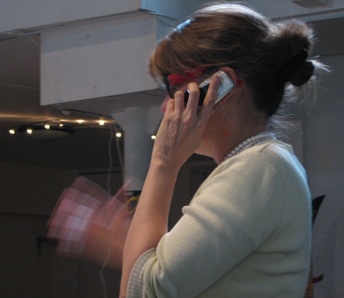 That’s me on the phone at my friend’s son’s house a couple of weeks ago, talking to Howard. I mention Howard because he helped me fix my chapter yesterday. I’d written a chapter that really needed to be half the size, but I got one half of that half done, and then couldn’t go any further. At a certain point you need someone who doesn’t love the material the way you do to be ruthless. Howard came over and got the other half done. Quickly. Slash and BURN. Howard was THE CLEANER. And now I have a killer chapter.

I’m starting to feel just a tad freaked about getting this all done by June. I still have a pile of reading to do as I write. I keep finding stuff and people keep sending me stuff which is relevent–not a complaint about the senders, sending me relevent stuff is a very good thing. I’m excited about this one paper that was sent to me because the title is Entanglement, Consciousness Waves, and RSPK, and I hoping it’s going to discuss quantum entanglement.

Because, as it happens, I discuss quantum entanglement in my book, in the chapter we were editing yesterday as a matter of fact. I wasn’t putting it forward as a theory or anything. I was using it as an example of a weird thing about quantum mechanics that Einstein had a problem with, and comparing it to Einstein’s problem with telepathy.

It would be kinda cool if the authors of this paper (William G. Roll and William T. Joines) actually are incorporating it into a theory about parapsychology, because then their theory would fit nicely and neatly at the end of the book somewhere. So, the point is, I want to read this paper, but the other point is, I’ve got to read this paper. And 20 billion others. (Sob.)

Ghosts of Christmases Past

I felt despair, I must admit.