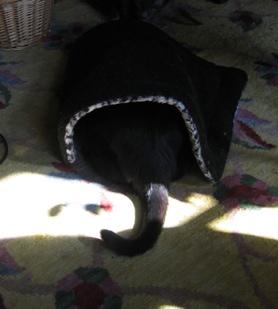 Finney decided that sleeping under the cat bed was better than on top of.

I’m in such a good mood. I’m completely on my schedule for this book. The next chapter is going to be a challenge, though. It’s going to be a lot of Duke University politics that will set the stage for the Parapsychology Laboratory leaving Duke and parapsychology in Russia.

It’s a challenge because I know my editor has had enough of Duke politics, and I’m not so interested in parapsychology in Russia. Sounds like a potential disaster, I know. My plan so far: make it really short. Somehow I have to make this chapter un-put-downable. And short.

The chapter after that will be three ghost stories I’ve found a long the way, and I can’t wait to get to that. Nothing better than a good ghost story.

American Idol Comments. Normally I’m unable to see it in one so young, but that Blake is a sexy little thing. His version of “It’s The Time of the Season,” was very be-still-my-heart for me. His take on the line ‘what’s your name, who’s your daddy,’ was dark and interesting. For me, it’s Melinda and Blake now.