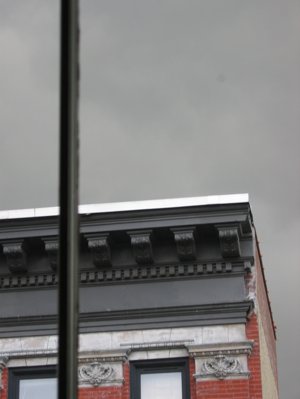 It’s pretty outside my window right now, if you like grey, which I do. Rain rain rain is imminent. I rarely have anything substantial to say, it seems. I do think about things, a lot actually, but then I write all the time and by the time I get here I’m down to: “I like grey.” (“Fire bad, tree pretty.” The cool kids will know this reference!)

My birthday is still a month and a half away, but I like to get all my ducks in a row and I’ve already started preparing. I scheduled a hair appointment for a few weeks before. I’m going short again. That’s the main thing. Then there will be brow appointments and pedicures, it’s nuts I know, but it gives me a nice regenerative feeling. What the hell?

Right now we’re arguing on Echo about should Virginia Tech have “locked down” the school after the first murder. I’m on the side that says we only know that the first murders were a warning sign after the fact, there was no way to know that at the time, and how do you lock down a campus anyway, and given that the killer was a student, what would that have accomplished? He could have ended up locked down somewhere with a different set of victims. But I’m all for learning what we can from the experience, and perhaps coming up with the best ways to send crucial information to all students quickly for the future (but again, in this case, that same information would have been sent to the killer).

Boiler Fire in My Building

6 thoughts on “Shades of Grey”