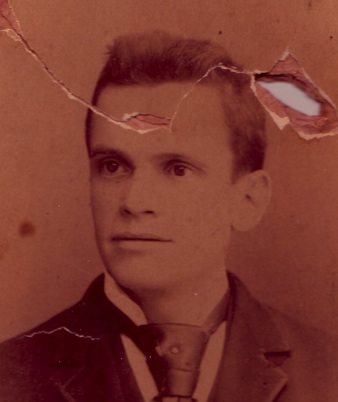 This is my great grandfather, Claudius Corke. If it weren’t for Claude, I’d be sure I’m adopted. I don’t think I look like anyone in my family except him. People say I look like my mother, but I don’t see it other than we both have brown hair and brown eyes. But I totally see my face in his. Perhaps the resemblence is less now that I’m older, although I can still see it. I scanned it in because I heard from someone who believes she might be descended from a sister of Claudius’s and she asked to see a picture.

Claudius came to the United States from the Isle of Wight in England, but I don’t know when. I don’t know much of anything about Claudius except he worked as a printer at a magazine, everyone liked him, and he liked to recite poetry. He lived and died in Sheepshead Bay. (Could there be a better town name than Sheepshead Bay??) Oh, and his wife was twice the size of him. He was very thin his whole life.

I think he looks like someone who would have gotten beaten up a lot on the playground when he was a kid. Maybe that’s he why he honed the likability skill, as a means of self-preservation.

Let’s Start the Week With Dogs!