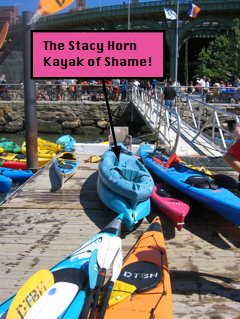 I entered my first kayak race, the Harrison Street Regatta, (sponsored by The Downtown Boathouse) and came in last. Dead last. That is the actual kayak I raced in to the left. I was ten minutes behind everyone else, maybe more, maybe a lot more, but at least I finished!! I’m quite proud to tell you the truth. In my defense: I went out on a kayak for the first time, what? Two weeks ago? Or was it last week? Plus, my oar was messed up (seriously). And the wind was against me. Okay, it was against everyone, but I’m a weakling to begin with, so, ah, yeah. I feel great. It was a beautiful day and a perfect thing to do. I’m going to pay tomorrow. But maybe all my gym work will save me and I won’t ache too badly.

One sad note, I was walking home and there was a big fire downtown, and it looked like it was in the exact same spot as the Trade Center. Of course it brought it all back to see the smoke, and I swear I could smell that smell. Sure enough, I just looked it up and it’s the Deustche Bank. That was one of the buildings surrounding the site. It was coming down anyway, but still.

Anyway, the race was a mile, and I practically collapsed at the end of if and then I learned we had to row BACK. I almost burst into tears. But they gave me a narrower and faster boat to row back with and an oar that wasn’t messed up and I was fine.

Volunteers rowed on the sidelines, making sure everyone was okay, and this poor guy got stuck with me, because I was so far behind everyone else. He was very nice about it. 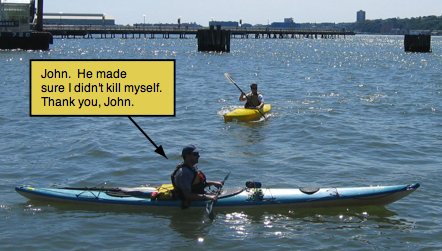 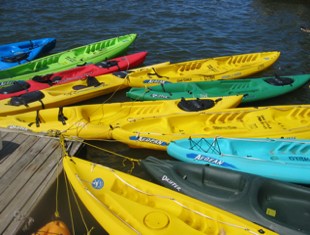 And a bouquet of oars. 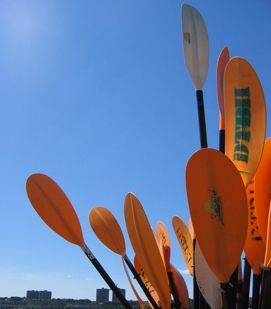