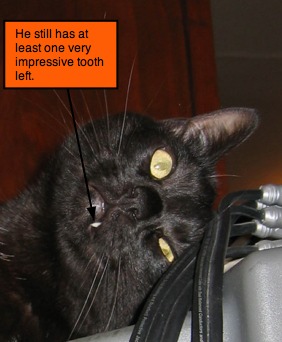 Four more days of giving him medicine four times a day. I wish I could tell him. Sigh.

I’m actually feeling bad for Watson, who lost his post at Cold Spring Harbor and now will be remembered for his remarks about race as much as his DNA discovery. He’s trying to apologize for them, but there doesn’t seem to be any getting around his implication that blacks are genetically inferior. I did note that he didn’t say better or worse, he just said different, and different is neutral. But then he made that comment about black employees (“people who have to deal with black employees find this is not true,” that we are equal). And saying we are not equal feels less neutral, except that was the reporter paraphrasing so to be fair we should hear the whole thing in context. But he also made that comment about being gloomy about Africa, although I have no idea what he was trying to say, except again it was about not being equal.

Should I go to the library today? Maybe I should. It looks like a nice day for a walk. It’s probably a three mile walk there and back so I always feel like I got my exercise in for the day when I go to the library. Part of the reason I’m such a walker is because my step-father had terrible terrible problems with his legs, and his doctors always told him walking would help and he just never really took that advice, and suffered greatly as a result.

Me in my College Days