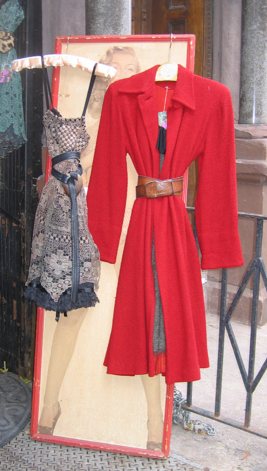 I came up with an idea for an ongoing series. My neighborhood has transformed in the last few years. I’ve posted about this before, Bleecker Street and other blocks are now filled with stores I can’t afford to shop in. But I don’t mind, the windows are always filled with beautiful clothes that are nice to look it. The danger is, every once in a while there is something I want. They taunt me.

Technically, this first entry doesn’t count. This store on Perry Street has been here for a long time. Their clothes are magical, and too young and overly-dramatic for me, but they are like works of art and I love looking in their window. But yesterday they put out a red coat on the street that I WANT. I didn’t even look at the price tag. Even if it’s reasonably priced, which I’m sure it isn’t, I’m on a tight budget so there’s no way. But still. Want it. The red is deeper than what is coming across in this picture. The dress next to it is very pretty too, but too young for me.

So, Christmas next week! I have to say, Christmas TV has been abysmal. None of my favorites have been playing, like: Bundle of Joy, the Alastair Sim version of A Christmas Carol, Mr. MaGoo’s Christmas Carol. I’d love a marathon of Christmas TV episodes or something. I tried to bittorrent the Bones Christmas episode from the first season, but I can’t find a copy that anyone is actually seeding.

Anyway, I will have fun photographing clothes I want, I think. I can’t forget about 14th Street, which used to be so depressing I wouldn’t walk on it and now it has stores like Stella McCartney’s.