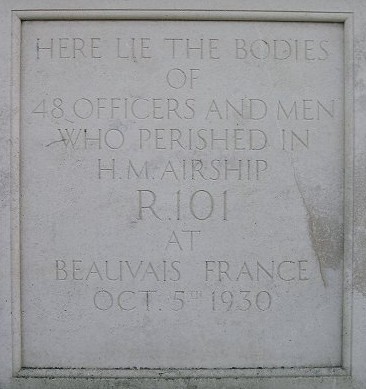 If you’re in New York, the Parapsychology Foundation is hosting an event on March 27th that will include a screening of a new film by their Film Archivist, Irish Artist Susan Macwilliam, and selected readings from Awareness, a book written by the medium Eileen Garrett about her psychic abilities. (Eileen Garrett was the Foundation’s co-founder.) I’ll be going!

Susan MacWilliam’s film is 13 Roland Gardens. It features Eileen Coly, Garrett’s daughter, talking about her mother’s famous R101 Airship seance, where Garrett communicated with the dead crew of the British airship which crashed in France on October 5, 1930, killing 48 people. Mrs. Coly also talks about living above the Harry Price Laboratory at 13 Roland Gardens. Price was a well known psychical researcher from the 1930’s and 1940’s.

The picture is from the Bedfordshire Library website. “National feeling surrounding the disaster was huge; the funeral procession through London was watched by thousands. The bodies were then taken by special train to Bedford to be laid to rest in a communal grave in Cardington cemetery.”

Just How Morbid Am I?

Who was Richard Sale?

The October Project and the Book of Rounds