My undergraduate degree is in fine arts, and while I was a student my fellow male students were always asking the girls if they could draw or paint them, naked of course. Hey, I don’t blame them for taking a shot, and some were sincere, but come on. It was about getting to see girls naked. I always said no. At the same time, I wasn’t against the idea, and I was too modest and wanted to get past that. So when an artist named Craig McPherson who was older and a little further along in his career asked I went to an old ice factory in Washington Heights and took off my clothes.

Sometime later my friend Chris saw this drawing and said, “That’s Stacy Horn’s butt!” I’ve always loved that part of the story. We’ve been best friends since we were 12–I guess she’d seen my butt enough to know it, even transformed in another medium.

I don’t believe I ever saw Craig again, but he emailed me a couple of weeks ago and generously sent me the drawings he made that day. I am just so thrilled to have them. I absolutely love them. Isn’t this beautiful? The second one was too big for my scanner, but it’s lovely, too. Here is Craig’s website. I love his work. I am patting myself on the back for having such good judgement. I’m drawn to the same things he is visually, he sees the city as I see it. This dark, industrial, smoldering, clanking, fiery city. He has a mural down at the World Financial Center (commissioned by American Express) that I have to go see. A detective that I was talking to when I found out said he knew it well. Craig also has a show up right now at the Frick in Pittsburgh, if you’re in the area.

Thank you so much for these drawings, Craig. As I said, I will treasure them. Thank you. 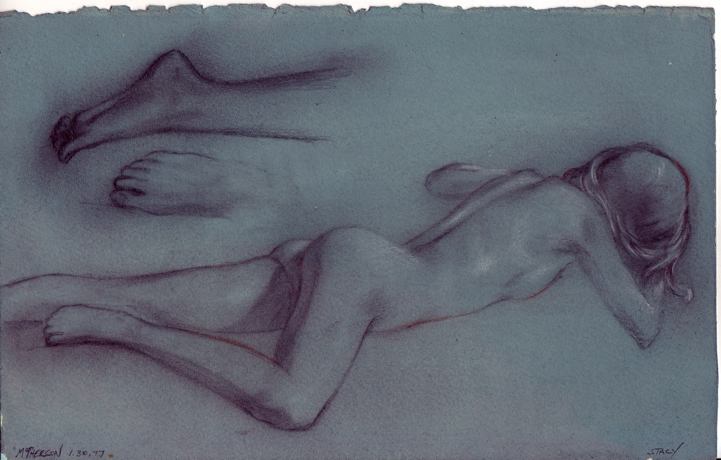 A Blouse I Can’t Possess