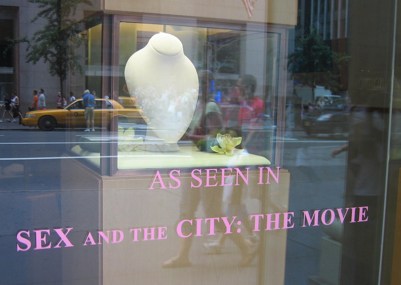 Okay, a very little. The other day on my way to the gym I saw a couple of girls posing on the steps of what they thought was Carrie Bradshaw’s apartment in Sex and the City, except they were in front of the wrong building. Carrie’s apartment was one more over and I told them. I said a little! What if they were from Australia and got all the way home before they figured it out?

The rain stopped yesterday so I went uptown to find my haunted mansion. Unfortunately it has since been replaced by a high-rise. And an ugly one, too, in such a pretty spot. This was between 62nd and 63rd, on Fifth Avenue, overlooking the park. Such a prime piece of Manhattan, badly used alas.

I took this picture on Fifth Avenue on my way back home. (What?? What was seen in Sex and the City??)