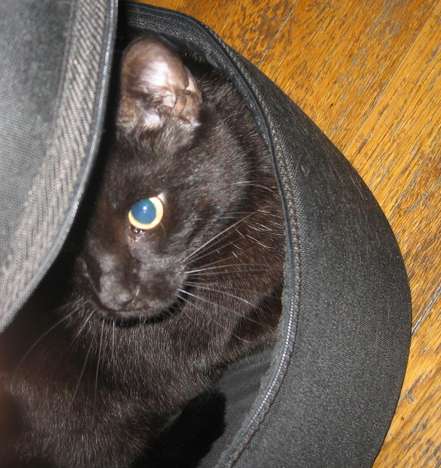 You know how cats love boxes? You leave a box out and a cat jumps in it? Well, to a cat, drumbags count as boxes.

Yesterday, while I was researching the building on 5th Avenue I came across a October 9, 1851 story that went: An Infant Found Drowned. At an early hour Tuesday morning while Patrolman Houston of the Sixteenth Ward [the Chelsea area] was patrolling his beat, he discovered the dead body of an infant floating upon the surface of the water, off the foot of Twenty-Third street, North River [the Hudson] which he brought to shore and fastened to the dock to await a Coroner’s inquest. The little creature was wrapped in a woolen blanket, and had a large stone tied around its neck, which was evidently done by the inhuman mother.

Hello?? America? Innocent until proven guilty!! Although it probably was the mother OR THE father (the writer was sexist on top of it). Ah, life can be so sad. We’re all living the Wisconsin Death Trip.

Anyway, I hope to see the movie Hancock today. I also started a lovely little book called “The Secret Life of Bees.”

How to Be a Rock Critic

The Original Site of the Lab

4 thoughts on “Kitty in a Drum Bag”