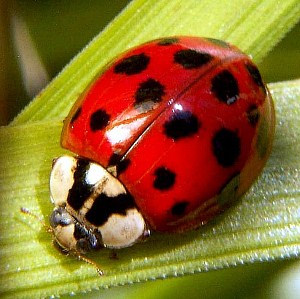 No, not ladybugs. Last night one of those huge, monster flying cockroaches was loose in my apartment, freaking dive-bombing me. I can take most bugs, even spiders, but these things just terrify me for some reason. I can’t be in the same room as one without literally screaming and crying. I couldn’t even bear to put a picture of one of them up here so I put up a picture of a ladybug instead, it’s that nuts. I ran to my neighbors, they weren’t home, logged onto Echo and explained my problem, hoping someone would volunteer to come over, but no one did.

I had no choice but to try to come up with a plan to kill it myself, and I will already tell you I was not successful so he’s going to pop up again, waving his evil “Yes, I am that evil and I see you” antennae at me.

I did come up with one idea that helped though, and that was the idea of opening an umbrella and using it as a shield. It just made me feel less panicked. My plan was to swat at him with this huge feather duster I have, which would hopefully mess up his flight, cause him to fall to the ground, then I’d smoosh him with my shoe.

So for a while I was walking around my apartment carrying an open umbrella, a big feather duster and a shoe. Yeah.

Anyway, this bug was always one step ahead of me, flying too high and too fast. Plus, I mostly cowered.

Finally I gave up and tried the neighbors again, and Beth was home this time and she sent over Malik, but the freaking bug was once again hiding. Thank you for trying, Malik! I appreciate it!! I was able to get to sleep, but he’s still in here somewhere, and you know he’s going to appear at the most inopportune time, like when I’m carrying a large mug of hot coffee. Over my keyboard. With a cat next to it.

It’s the flying part that gets me. I just cannot cope. It’s the most unfair of all unfair advantages.

The point is: they suck.

Halloween in the West Village

Doctor Who and my Forty Part Motet Essay

6 thoughts on “They Should Not Be Allowed to Exist”