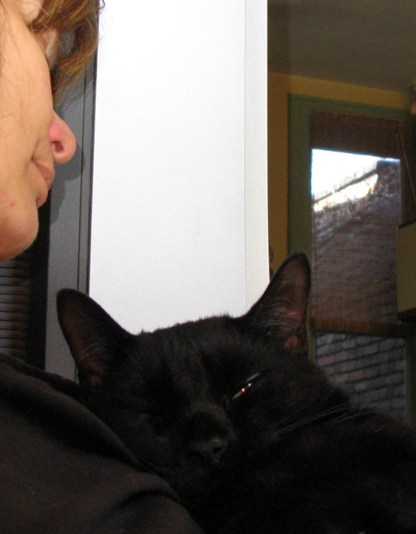 Here are me and Finney, resting easier now.

I ended up creating a place on Echo so we could all watch and comment on the debates together, and it helped ease my extreme anxiety. I feel a lot better now.  For people whose minds are made up of course, they will love McCain’s condescending “doesn’t understand” refrain, but I think enough people will see it for what it was, and his total lack of graciousness throughout the debate.

Obama, on the other hand, was gracious, polite, informed, and kept on point about the problems and what he would do. McCain spent more time dissing Obama than offering solutions. I would have liked to see more moments like Obama’s response about the bracelet, and his response to the liberal comment, but those were great, and at moments he soared, especially towards the end.

So yes, Obama could have done better, and I’m sure he will now. I feel a lot less anxious about the second debate.  We were coming up with responses to all the “don’t understand” comments, and I liked one person’s suggestion of, “I understand very well, but I disagree.”  With how you just characterized, etc.

Speaking of “characterized,” I think that was the word Sarah Palin was shooting for, not caricature.

Gardens of Awe and Folly

4 thoughts on “I Watched and Holy S**T, I Feel Better”