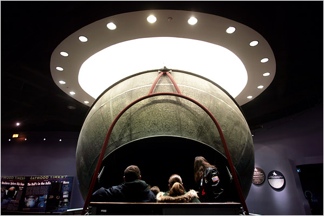 I missed most of the debate due to my choir rehearsal, but I just saw that once again McCain used Obama’s funding request for a projector for the Adler Planetarium as example of wasteful spending.

The people at Cosmic Variance responded to that best.  First they posted the text from Obama’s FY08 funding request:

Adler Planetarium, to support replacement of its projector and related equipment, $3,000,000:

One of its most popular attractions and teaching tools at the Adler Planetarium is the Sky Theater. The projection equipment in this theater is 40 years old, and is no longer supported with parts or service by the manufacturer. It has begun to fail, leaving the theater dark and groups of school students and other interested museum-goers without this very valuable and exciting learning experience.

“Sorry, but replacing 40 year old equipment at one of the leading science education facilities in this country (the Adler Planetarium is located in downtown Chicago and is the oldest planetarium in the Western Hemisphere in existence today) is one of the best investments in the future that I can think of. I’ve always equated planetariums with science education – an area where the US seems to be lacking. In fact, the state-funded university where I was an undergraduate had one and its projection equipment was less than 40 years old. In fact, when I was in the 4th grade, my class took a field trip to the McDonnell Planetarium in Forest Park. It was one of the coolest things I did in grade school (well, that and the trip to see the Egyptian mummies) and I remember it to this day.”

(The picture is from the New York Times.)

Virus and the City: Remains of the Day

Not at all Breaking News