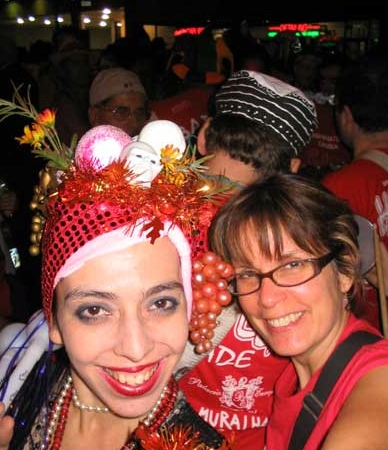 Alright, I thought of another Aly story.  I can’t help it.  Plus Halloween is coming up and it made me remember this particular Halloween story.  I wrote about it in Waiting For My Cats to Die.  Here is that passasge:

“Twenty years ago I sat on the corner in the West Village of Manhattan  where I live, where I’ve lived for my entire adult life.  I was watching the Halloween Parade when a pack of drummers came up.  There had to have been over fifty of them.  I stood up, started dancing in the street and I danced with them for twenty blocks straight.  I didn’t stop until they stopped.  Now, I am not a dancing-in-the-streets kind of girl.  I would like to think I am, instead of the overly self-conscious, trapped, and paralyzed person who chants “I hate myself, I hate myself, I hate myself,” every morning in the shower … For the next twenty years I would think about it but it wasn’t the dancing I couldn’t forget.  It was the drumming.”

Here’s what I didn’t say.  Aly was the one who got up and started dancing away, following the drummers, and I followed him.  I copied him and had the time of my life.  We danced through the streets of the West Village for the next couple of hours, until the parade ended in Washington Square Park.  It was absolutely exhilarating and one of my best memories.  Even though I described myself as self-conscious and trapped, I’ve never been a shrinking violet either, I’ve always been pretty game.  But I have my fears and also, it just would never have occurred to me to get up and start dancing and following those drummers like that.  Past all those people watching.  What I realize now, looking back, is that it un-paralyzed me.  It gave me ideas.  It was also confirmation that there is little in life more thrilling, more life-changing, more enormously invigorating than doing something you were afraid to do.  You feel so powerful.  Like a happy Godzilla.  I felt very self-conscious when I first stood up to dance in the street, but I knew it was going to be fun and I wasn’t going to let Aly dance away from me and have all the fun.

It’s like that Eleanor Roosevelt quote I posted a while back. “You gain strength, courage, and confidence by every experience in which you really stop to look fear in the face. You must do the thing which you think you cannot do.”

I still can’t get on planes anymore though.  (A story for another day.) Anyway, so I was thinking, how could someone once so alive like Aly be dead?

The picture is me and my friend Marianne at the Village Halloween Parade, which I drum in every year now.

Man of the Year

Taking a Break From World Destruction

5 thoughts on “How Could a Person Like This be Dead?”