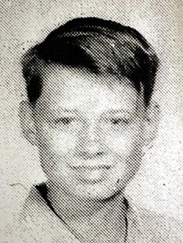 If you’ve been following the story you know that the dig for Roger Dale Madison ended without finding his body.  Weston DeWalt described the scene to me.  “A Ventura County Sheriff’s Department chaplain said a few words and the sister went around and shook the hands of the 50-60 detectives, dog handlers, volunteers” and Weston himself.

I wonder how many people had to fight tears when Roger’s sister shook their hand.  It wasn’t ended because they didn’t think Roger had been buried there, but the dig had moved close enough to the highway to become dangerous to the recovery workers and the dogs.  But “all three cadaver dogs on scene were continuing to alert in the pit and upon the last of the dirt taken from the pit and upon the equipment which had been in use.”  Everyone believes Roger is in there.

His sister does.  And in spite of the outcome, I could see her being extremely grateful to everyone who clearly tried as hard as they could to find her brother. Whenever anyone has tried to help me when I’ve needed it, it meant the world to me that they did what they could, even if they didn’t succeed.  I could definitely see how this might be, in its own way, enough for Roger’s sister.  And when she shook their hands, even if she felt disappointment, it wouldn’t have been with a single one of them.  They must have been like angels to her.

Also, DeWalt said that because of all the media coverage, people “came forward and offered extremely important information. One individual had personal knowledge of how Mack Ray Edwards attracted victims, the methods he employed to gain their trust, and offered details about other criminal activity in which Edwards was involved.”  This will be an enormous help to Det. Vivian Flores and others who continue to investigate Edwards for other cases of missing children. Maybe other families, who never got the answers they needed, will find similar comfort from the work of all these people (and the dogs) who are still out there trying.