We’re starting to ease up on the anxiety over here on Perry Street and allowing ourselves a moment of relaxation.  One of many good parts from the Anchorage Daily News endorsement for Obama:

“Sen. McCain describes himself as a maverick, by which he seems to mean that he spent 25 years trying unsuccessfully to persuade his own party to follow his bipartisan, centrist lead. Sadly, maverick John McCain didn’t show up for the campaign. Instead we have candidate McCain, who embraces the extreme Republican orthodoxy he once resisted and cynically asks Americans to buy for another four years.

It is Sen. Obama who truly promises fundamental change in Washington. You need look no further than the guilt-by-association lies and sound-bite distortions of the degenerating McCain campaign to see how readily he embraces the divisive, fear-mongering tactics of Karl Rove. And while Sen. McCain points to the fragile success of the troop surge in stabilizing conditions in Iraq, it is also plain that he was fundamentally wrong about the more crucial early decisions. Contrary to his assurances, we were not greeted as liberators; it was not a short, easy war; and Americans — not Iraqi oil — have had to pay for it. It was Sen. Obama who more clearly saw the danger ahead.”

(I actually took this picture because Finney and Buddy are fighting these days, I don’t know why, and this was a relatively rare moment of detente.) 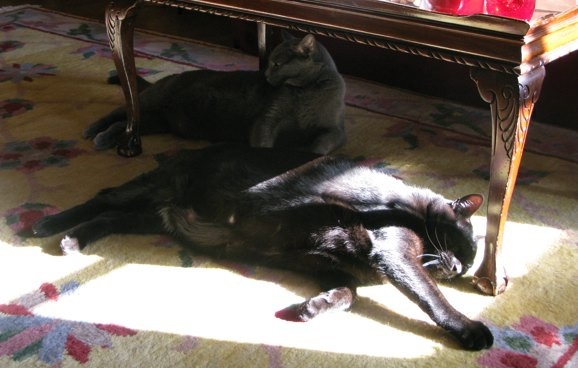