I felt so awful yesterday morning, I’m not sure what it was about exactly. I think a combination of the holidays, “women’s” stuff [details omitted to spare fragile male readers, but really, you guys should thank the universe every day, and speaking of which, it’s just not fair, please tell me you’re going through some male equivalent of this, and I’m speaking to the men of a certain age here].  I had to make myself shower, run errands, etc.

But then there was our second choir performance.  Both performances were sold out! 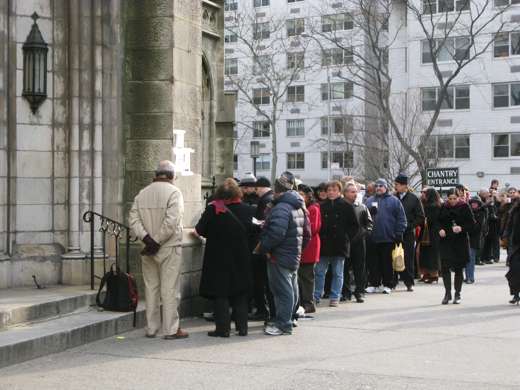 Here’s from the altar, before they opened the doors. 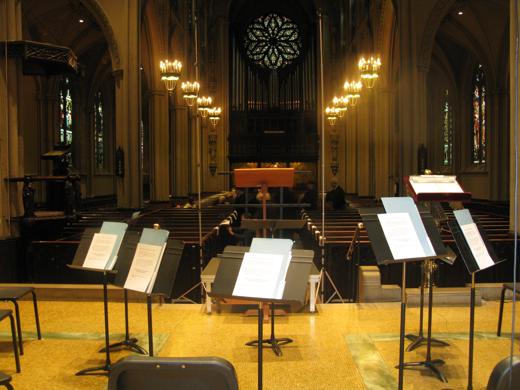 Singing is pretty much a never-fail mood elevator.  And nice friends were there (and I had family and friends there the night before).  So, I was feeling good again when I headed out to Long Island.  Here’s the thing about Long Island, where I grew up.

First, being on the Long Island Railroad always fills me with complete and utter despair.  I think the only person who might understand this is my friend Chris Hegarty.  We used to sneak into the city every chance we got growing up, where we’d invariably get into some little bit of trouble, then we’d miss the train home and have to spend time in the most depressing place in New York (Penn Station) at the worst hour of the night, waiting for the next train, which was always hours later.  Plus, we were going home which just added to the misery.  All I wanted was to live in New York City and having to head back out to Long Island just made me sad.  (No offense to Long Island, especially where I grew up which is very pretty.)

Then, for some reason, just being on the train makes me more than ever aware of the passage of time.  I sit and watch towns and stations going by that I have watched go by for decades, and I remember looking out these windows when I was five years old, then as an adolescent, then a teenager, a college girl, etc.  Same towns, same buildings, same cemeteries, lots of crumbling, some growth. And I can’t help but be aware that in the not too distant future these trains will continue chugging along long after I am gone.  Then I think about the people who are, in fact, gone.

Lovely, right?  But I had a fantastic time at my sister-in-law Karen’s birthday party!!  (Karen, you looked great by the way, I meant to say.  That was a good shirt for you, both color and style.)  Man did my brothers marry great women and have great kids.  I so lucked out.  Speaking of which, my father’s second wife Arlene (both my parents had great second marriages) is also fantastic.

I had such a fun time re-living the joy of Obama’s election with one of my nephews and with my stepmother’s sister.  We kept smiling and smiling and going over all the details, just relishing and sharing our hope for the future. This was my nephew’s first election.  Can you imagine?  Then I had the enormous pleasure of learning that one of my relatives, who I believe has always voted republican, voted for Obama (don’t want to say who because I don’t know how he feels about making such a thing public).  I just kept hugging him.  As he went over his reasons I just kept hugging him.

Here is the board listing the departure times and tracks for the Trains of Doom. 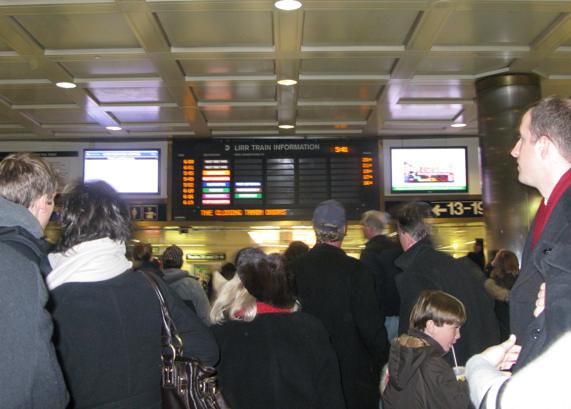 My Desk Has a Cat On It

2 thoughts on “Music and Relatives Lift the Blues”