I read that Times piece about Andrew Cuomo fuming about Caroline Kennedy.  I have no great love for Cuomo, and I have nothing against Caroline Kennedy, but I do think the fact that she is being considered is insane. This would be treating a senate seat like an internship. Seriously, if she wants the job she can campaign for it when it comes up again, but for this interim period, it should go to someone with more experience in … something—what jobs has she even held??  I do like that she wrote a book about the Constitution, though.  But not even voting all those times? You’ve gotta be kidding me

I just can’t believe there’s even the possibility of handing over a senate seat to someone based on their name and connections.  Maybe she’ll do a great job, but for something so important that’s just a little too much roll-of-the-dice for me.  Also, I do admit that article did soften me on the idea of Cuomo.

I took this picture at the yearly caroling party at a friend’s house.  I envy people with cats who don’t weigh a million pounds and kill you when you have to lug them to the vet. 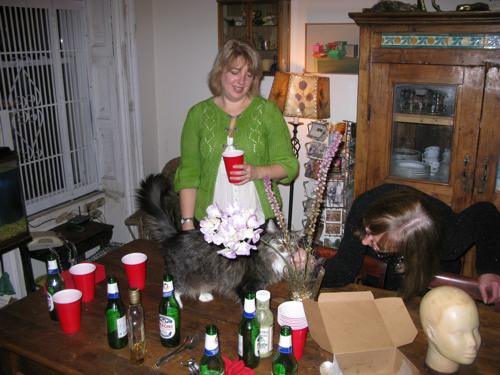 Things are Looking up in Durham

Stop and Smell Them