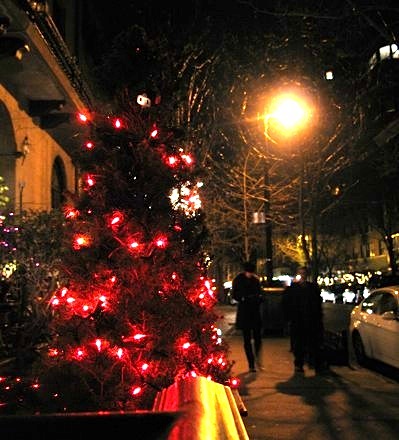 I’ve got a million of these side street shots. I keep seeing pretty things as I’m walking along, but I really need to figure out a different want to capture them.

The title of this post is from an article in Science News I’ve bookmarked to read. I just love it’s metaphoric possibilities.

Here’s my opinion about Obama and Rick Warren: When Jon Stewart started inviting conservatives on his show and not only didn’t read them the riot act, he treated them respectfully I was furious.  Absolutely furious.  But now I like it.  It doesn’t mean he agrees with them, and sometimes he will confront them more forcefully, but it’s never in an attack-dog manner.  And now conservatives regularly come on his show, and the issues are discussed and every once in a while, there are steps toward a middle ground.

I am tired of all the hate and hostility and divisiveness in our country. We have to start somewhere.  A dialogue must be begun.  We have to work together.

Look at it this way: how great would it have been if a conservative president had ever invited a gay minister who supported marriage for everyone and civil unions to lead the prayer at one of their inaugurations?  I never felt like Bush was my president too.  I actually felt like the enemy for eight years.  It shouldn’t be that way.  If Obama can be all Jon Stewart-y about running the country, I’m for it.

Tretinoin aka Retin-A aka Renova

From Black and White to Color

5 thoughts on ““Dark Energy Constantly With Us””